by Tibi Puiu
in Mind & Brain, Psychology, Studies
Reading Time: 3 mins read
A A
Share on FacebookShare on TwitterSubmit to Reddit

Psychologists closely studying chimpanzee, bonobo and human infants found striking similarities among the three species in terms of different types of gestures. Their findings seem to back-up the theory that claims language, as we know it, evolved from gesture-based communication first. 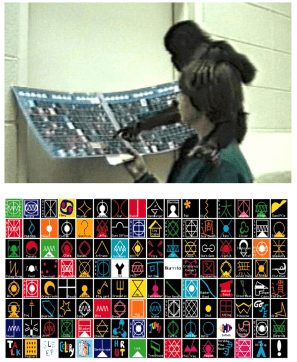 Panpanzee, a female chimpanzee (Pan troglodytes), and Panbanisha, a female bonobo (Pan paniscus) were raised together at the Language Research Center in Atlanta. Here, the caregivers taught them to communicate through visual symbols (geometric shapes called lexigrams), gestures and vocalization (non-speech sounds). In parallel, a human girl was followed who grew up in her parents’ home, along with her older brother. Video analysis for her began at 11 months of age and continued until she was 18 months old; video analysis for the two apes began at 12 months of age and continued until they were 26 months old.

For a few months, researchers  analyzed countless hours of footage and looked for telltale communicative signs and gestures exhibited by the infants, marking the first time such data have been used to compare the development of gestures across species.

“The similarity in the form and function of the gestures in a human infant, a baby chimpanzee and a baby bonobo was remarkable,” said Patricia Greenfield, a distinguished professor of psychology at UCLA and co-author of the study.

Gestures made by all three species included reaching, pointing with fingers or the head, and raising the arms to ask to be picked up – all communicative gestures, which make the findings even more revealing. It’s important to note here that chimpanzees and bonobos are our closet relatives in the evolutionary tree. 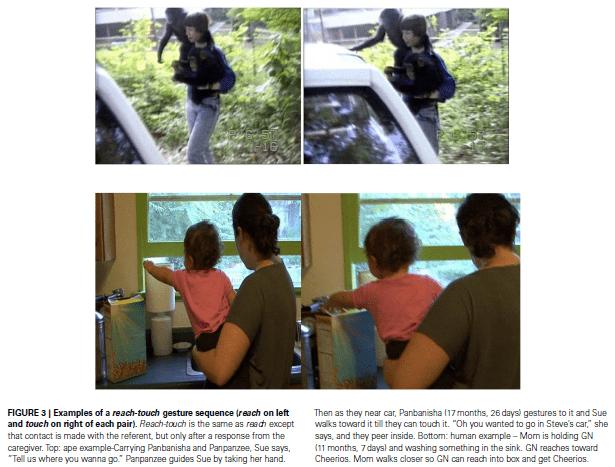 During the first half of the study, communicating with gestures was dominant in all three species. During the second half, all three species increased their symbol production — words for the child and lexigrams for the apes. However, the child progressed much more rapidly in the development of symbols. Words began to dominate her communication in the second half of the study, while the two apes continued to rely predominantly on gesture.

“Gesture appeared to help all three species develop symbolic skills when they were raised in environments rich in language and communication,” said Gillespie-Lynch, who conducted the research while she was at UCLA. 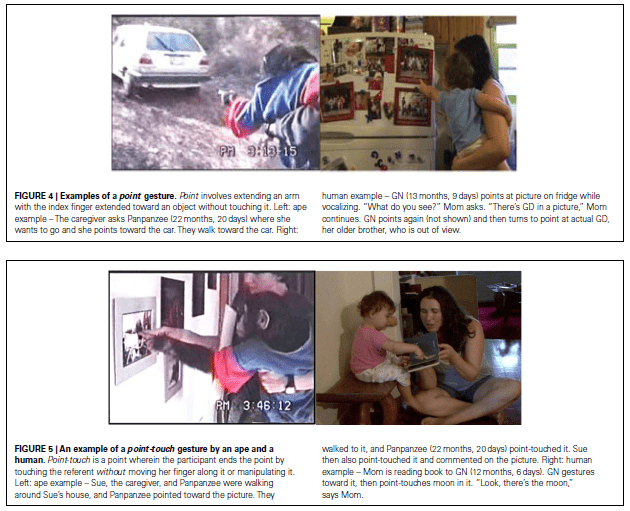 Seeing how the child transitioned at one point from a gesture-rich orientated mode of communication to a symbol-rich mode, this could be interpreted a developmental model of the evolutionary pathway to human language and thus evidence for the “gestural origins of human language,” Greenfield said. 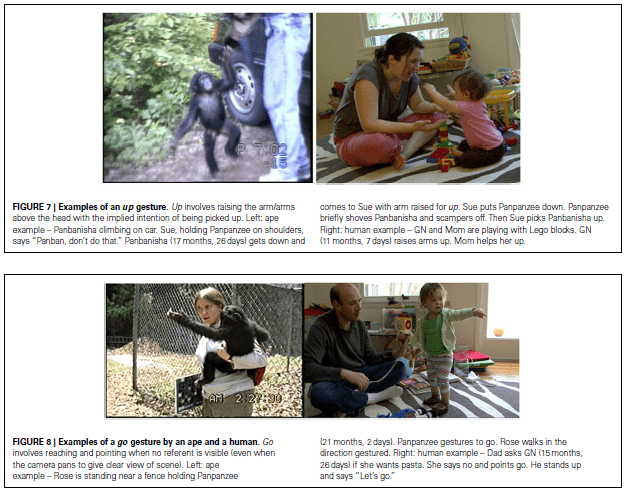 What’s revealing about the findings ins’t necessary that they add weight to the claim that gestures signified the very first step in the evolution of human language, but rather the importance lies in the fact that a key link may have been uncovered: co-evolution of gestural and vocal communication. Most of the child’s gestures were accompanied by vocalization (non-language sounds); the apes’ gestures rarely were.

“This finding suggests that the ability to combine gesture and vocalization may have been important for the evolution of language,” Greenfield said.

The findings were reported in the journal  Frontiers in Psychology.