by Mihai Andrei
in Biology, Research
A A 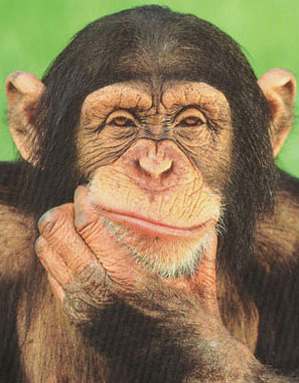 There’s always been a lot of effort put into understanding what (if something) makes humans superior to other man-like mammals. The science world seems to be split into two camps, which can’t agree with each other. Now, researchers at the Yerkes National Primate Research Center, Emory University, have identified a language feature unique to the human brain which gives some insight on how human language evolved.

The study used a non-invasive technique by diffusion tensor imaging (DTI); scientists were able to compare human brain structures to those of chimpanzees, our closest living relative. Yerkes researcher James Rilling, PhD, and his colleagues studied the arcuate fasciculus which is the inner connection of the brain areas that direct the language.

“The human arcuate fasiculus differed from that of the rhesus macaques and chimpanzees in having a much larger and more widespread projection to areas in the middle temporal lobe, outside of the classical Wernicke’s area. We know from previous functional imaging studies that the middle temporal lobe is involved with analyzing the meanings of words. In humans, it seems the brain not only evolved larger language regions but also a network of fibers to connect those regions, which supports humansÕ superior language capabilities.”

“This is a landmark,” said Yerkes researcher Todd Preuss, PhD, one of the study’s coauthors. “Until DTI was developed, scientists lacked non-invasive methods to study brain connectivity directly. We couldn’t study the connections of the human brain, nor determine how humans resemble or differ from other animals. DTI now makes it possible to understand how evolution changed the wiring of the human brain to enable us to think, act and speak like humans.”