Your bedpost plants might one day double as a reading lamp if MIT’s latest proect ever takes off. The team, which specializes in nanobionics, embedded nanoparticles into the watercress plant (Nasturtium officinale) to make it glow in a dim light. MIT hopes that this proof of concept one day makes its way into our homes and even replaces street lighting with glowing trees.

“The vision is to make a plant that will function as a desk lamp — a lamp that you don’t have to plug in,” said Michael Strano, Professor of Chemical Engineering at MIT and senior author of the study, in a statement. “The light is ultimately powered by the energy metabolism of the plant itself.”

To make plants glow, MIT engineers turned to luciferase — the oxidative enzymes that produce bioluminescence lending glowing abilities to animals like fireflies or certain mushroom species. Luciferase catalyzes a compound called luciferin which is what generates the light. Another molecule called co-enzyme A removes reaction byproducts that inhibit luciferase activity.

All of these three components were packaged into carriers that balance light and toxicity, submerged in a solution, then exposed to high pressure to force the particles into the stomata pores of leaves. This way, watercress plants were able to expel a dim light for almost four hours before the compounds wore off, as reported in the journal Nano Letters. 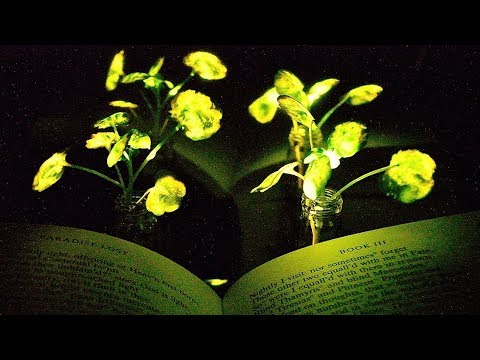 Next, the team plans on refining its technique to make plants glow for a longer time. The firefly-compounds could potentially be incorporated in a spray so that basically any plant can be coaxed to emit light. So far, MIT demonstrated the luciferase compounds in plants like watercress, arugula, kale, and spinach.

Such technology could one day prove as a useful alternative to conventional products for low-intensity indoor lighting. In some places, streets lamps could be replaced by glowing trees, for instance, thus reducing our energy consumption and carbon footprint.

“Plants can self-repair, they have their own energy, and they are already adapted to the outdoor environment,” Strano says. “We think this is an idea whose time has come. It’s a perfect problem for plant nanobionics.”