The baby horse still has its fur coat and hoofs.

While they were on an expedition in the Yakutia region of Siberia, Japanese scientists came across a one-of-a-kind discovery: the remains of a foul belonging to a now-extinct species of horse. The 40,000-year-old horse was found buried beneath 30 meters of permafrost, which preserved it so well that scientists found it with its tail, mane, and hooves still attached.

According to Semyon Grigoryev, the head of the Mammoth Museum in Yakutsk, the foul was just three months old when it died during the late Palaeolithic period.

The 38-inch baby horse still had all of its internal organs when Japanese researchers from North-Eastern Federal and Kindai Universities found it. The foul even retained its dark brown coat and, by one account, its legs had ‘zebra-like’ stripes — everything was extraordinarily preserved despite tens of thousands of years have passed since the baby horse’s death.

The horse was an Equus lenesis, also known as the Lena horse, which is now extinct.

“This is the first find in the world of a pre-historic horse of such a young age and with such an amazing level of preservation,” Grigoryev told The Siberian Times.

Besides the novelty of finding such a well preserved ancient specimen, the discovery may lead to other important scientific developments. Researchers also collected soil samples from where the horse was found, meaning they can now reconstruct what the environment looked like during the late Pleistocene.

The horse was found in Batagai depression, which is also called the “Mouth of Hell” — a tadpole-shaped, one-km-long crater initially created by the Soviets when they cleared the forest in the area. Scientists say the gash in the tundra is now being enlarged and shaped by climate change. Who knows what else they might find in the future as the permafrost clears away.

Although they don’t know exactly what happened to the young creature, it could be that it died in its sleep.

Experts that took part in the expedition came up with a version that the foal could have drowned after getting into some kind of a natural trap,” Grigory Savvinov, deputy head of the North-Eastern Federal University, told The Siberian Times.

There are no obvious wounds on the animal so an autopsy will determine what the animal’s last day looked like and how it finally perished. 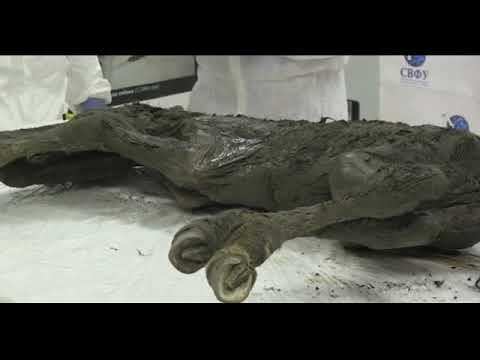