Elon Musk unveils the ITS: a spaceship capable of carrying 100 people destined to settle Mars

Yet another audacious plan from the billionaire entrepreneur.

Elon Musk took the stage of the 67th International Astronautical Congress in Guadalajara, Mexic, on Sep. 27 to announce his grand plans to colonize Mars and settle a ‘self-sustaining city within 40 to 100 years.’ Central to this plan is a new rocket and spaceship called Interplanetary Transport System (ITS). When and if ever completed, it ought to be the biggest and most powerful rocket ever built. It will also be a lot more spacious than astronauts are used to. The ITS will be able to carry 100 people, maybe up to 200, and make return trips to Mars at a fraction of the time and cost it currently takes.

The ITS rocket itself will look like a scaled-up version of SpaceX’s famous Falcon 9 reusable booster, only instead of nine Merlin engines, the planned interplanetary launch system will feature a whopping 42 Raptor engines. Raptor is part of a new class of engines developed at SpaceX will be powered by liquid methane and liquid oxygen (LOX), rather than the RP-1 kerosene and LOX used in all previous Falcon 9 rockets. Raptors will be about the same size as Merlin engines but will deliver three times the thrust.

The new rocket will be  254-foot-tall (77.5 meters), but when combined with the crew spaceship ITS will stand at an impressive 400 feet (122 m) high. That’s more than a hundred feet higher than Blue Origin’s recently announced New Glenn rocket and almost 40 feet higher than the iconic Saturn V rocket (363 feet tall), the rocket that put man on the moon for the first time and is still the biggest in space launch history.

As for the spaceship itself, it will be 62 feet (49.5 m) tall and 56 feet (17 m) wide. It will also be equipped with nine Raptors, but will initially leave with an empty tank to maximize the payload — cargo, supplies and (a lot of) people. Once in Earth’s orbit, the booster will make a soft landing at a SpaceX spaceport, launch back into orbit topped with the tanker full with fuel and rendezvous with the ITS spaceship to hand over the tank.

Once locked and load, the spaceship will fire its boosters and make its journey towards Mars — when the time is right, of course. Mars is closest to Earth only once every 26 months, so it’s a pretty tight. Propelled by the powerful Raptor engines, ITS ought to get to Mars in only 80 days, instead of the six months it takes to get there with present technology. There’s reason to believe the arrival time could be cut to as little as 30 days.

The spaceship, which sits atop the booster, will be 162 feet (49.5 m) tall and 56 feet (17 m) wide and will have nine Raptors of its own. The booster will launch the spaceship to Earth orbit, then return to make a soft landing at its launch site, which is currently envisioned to be Launch Pad 39A at NASA’s Kennedy Space Center in Florida.

Huge and optimized at the same time, the ITS should be able to carry 300 tons to low-Earth orbit or 550 tons in an extend version, Musk said. As for people, at least 100 should fit inside the spaceship which will also feature movie theaters, lecture halls and a restaurant — things International Space Station astronauts can only dream of.

Musk: ‘the only reason I’m gathering assets is to fund this’

Once in Mars’ orbit, the ITS spaceship will make a soft landing using “supersonic retropropulsion,” instead of parachutes. The landing should be more precise and safe using such engineering. It’s not clear what the first humans carried by SpaceX to Mars will do there, but Musk alluded that a solar-powered settlement would have to be built. Here, carbon dioxide and ice mined from Mars will be transformed into methane and oxygen — the fuel needed to power the ITS spaceship.

Oh, and this won’t be a one-ship deal. After the first trips are made, Musk expects 1,000 ITS’es will zip to and from Mars every 26 months. Anyone who isn’t happy with Martian accomodations can then leave back to Earth.

“We need the spaceship back, so it’s coming,” Musk said. “You can jump on board or not.”

Check out Musk’s hour-long presentation below. 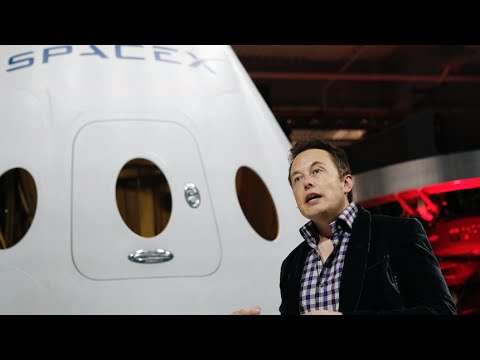 Musk’s plans sound audacious, but also very inspiring. This begs the next question: “how are we doing so far, Elon?” According to the SpaceX CEO, fewer than 5 percent of the company’s personnel and resources are devoted to the ITS — that’s in the order of a couple tens of millions of dollars. Musk says, however, that he wants to migrate most of SpaceX’s resources to the ITS project which requires about $10 billion in investment. He envisions a ‘huge public-private partnership’ will eventually make the ITS a reality. If all fails, it can be a 100% private venture seeing how Musk said ‘the only reason I’m accumulating assets is to fund this.’

You can also help too once it’s finished by buying a ticket and eventually becoming a Mars settler. There will be no special requirements, Musk responded to a question from the audience.

“The architecture allows for a cost per ticket of less than $200,000,” Musk said. “We think that the cost of moving to Mars ultimately could drop below $100,000.” Currently, the projected cost per person to reach Mars and come back is $1 billion.

“The objective is to become a spacefaring civilization and a multiplanet species,” the billionaire entrepreneur said.

For now, however, SpaceX should focus on making its launches air-tight. Earlier this month, one of the company’s Falcon 9 boosters exploded at the launch pad destroying the satellites it was supposed to carry into Earth’s orbit. In 2018, SpaceX expects to launch its unmanned Dragon capsule to Mars which prove a training-ground for the upcoming ITS technology.

This was an amazing announcement, but we can’t all share Musk’s enthusiasm or vision for that matter. We’ll just have to wait and see how this all pans out.