NASA figured out how Mars transformed from a lush environment to a red desert.

As we were hyping it a couple of days ago, NASA came up with a very interesting announcement – they figured out what transformed Mars from a watery, lush environment to the red desert we see today.

Astronomers have found tantalizing clues regarding the Martian past – there is now a growing consensus that Mars was, at one point in its past, able to support liquid water, protected by its atmosphere. But its atmosphere is now almost gone, only a thin blanket remaining – so what happened? Apparently, the culprit is the solar wind.

Unlike Earth, Mars lacks a global magnetic field to deflect the stream of charged particles continuously blowing off the Sun. Instead, the solar wind crashes into the Mars upper atmosphere and can accelerate ions into space

“Mars appears to have had a thick atmosphere warm enough to support liquid water which is a key ingredient and medium for life as we currently know it,” said John Grunsfeld, astronaut and associate administrator for the NASA Science Mission Directorate in Washington. “Understanding what happened to the Mars atmosphere will inform our knowledge of the dynamics and evolution of any planetary atmosphere. Learning what can cause changes to a planet’s environment from one that could host microbes at the surface to one that doesn’t is important to know, and is a key question that is being addressed in NASA’s journey to Mars.”

MAVEN was launched in November 2013, and its main mission is studying the planet’s upper atmosphere, ionosphere and interactions with the sun and solar wind. MAVEN indicates that solar wind strips away gas at a rate of about 100 grams (equivalent to roughly 1/4 pound) every second, and this actually wiped out the Martian atmosphere.

“Like the theft of a few coins from a cash register every day, the loss becomes significant over time,” said Bruce Jakosky, MAVEN principal investigator at the University of Colorado, Boulder. “We’ve seen that the atmospheric erosion increases significantly during solar storms, so we think the loss rate was much higher billions of years ago when the sun was young and more active.”

The solar wind is a stream of charged particles released from the upper atmosphere of the Sun. This plasma consists mostly of electrons and protons at speeds as high as 900 km/s and at a temperature of 1 million degrees (Celsius). Here’s an artistic representation of how this works, via NASA: 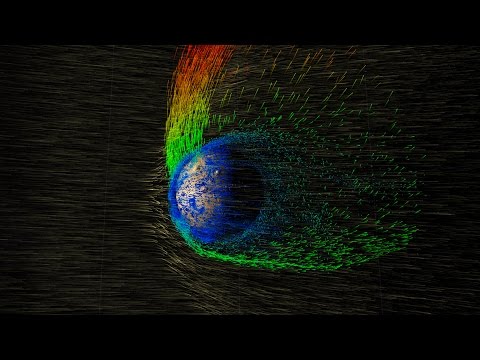 But it wasn’t just bit by bit that moved the mountain – a series of dramatic solar storms hit Mars’ atmosphere in March 2015, and MAVEN found that the loss was accelerated. This likely happened several times in the past, and it seems reasonable that several extreme events greatly accelerated the process.

“Solar-wind erosion is an important mechanism for atmospheric loss, and was important enough to account for significant change in the Martian climate,” said Joe Grebowsky, MAVEN project scientist from NASA’s Goddard Space Flight Center in Greenbelt, Maryland. “MAVEN also is studying other loss processes — such as loss due to impact of ions or escape of hydrogen atoms — and these will only increase the importance of atmospheric escape.”

The ultimate goal of the mission is to quantify how much of the atmosphere and the water on the planet was lost in space due to solar wind.