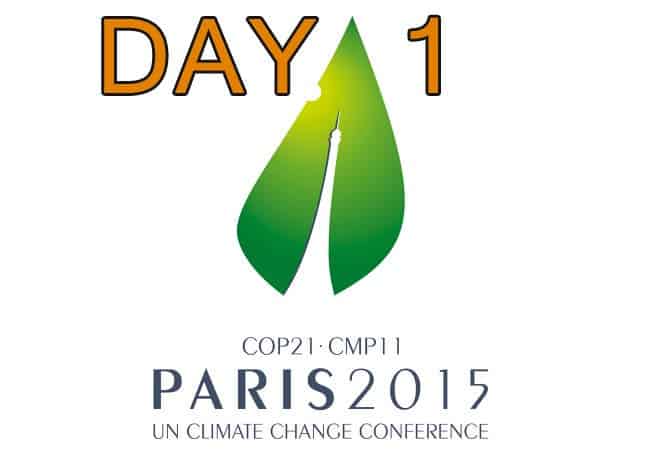 The Climate Summit in Paris (COP21) has started out in full force, bringing along a wave of optimism but also skeptic frowns. ZME Science is attending the summit and we’ll keep you posted with the daily events as they unfold and as we witness them – this is an event that has the potential to be critical for the future of our planet’s climate; this is the summary for the first day (if you have no idea what I’m talking about, please read this article to familiarize yourself with the context).

I was somewhat surprised to see that almost all the high-caliber participants at COP didn’t beat around the bush, saying clear and firm that we need to take action fast – not just for preserving the planet and keeping it clean for future generations, although that would be a good enough reason, but also because it is economically advantageous. To this end, many heads of state now support the phasing out of subsidies for fossil fuels, instead investing those money into more sustainable energy sources. Now is the time:

“Fossil fuel subsidy reform is the missing piece of the climate change puzzle,” began John Key, Prime Minister of New Zealand. “It’s estimated that more than a third of global carbon emissions, between 1980 and 2010, were driven by fossil fuel subsidies. Their elimination would represent one seventh of the effort needed to achieve our target of ensuring global temperatures do not rise by more than 2°C. As with any subsidy reform, change will take courage and strong political will, but with oil prices at record lows and the global focus on a low carbon future – the timing for this reform has never been better.”

Climate change won’t spare anyone from any countries, but some are more vulnerable than others. Building on two years of consultations at regional and global level, representatives of these vulnerable countries will meet to deliver a declaration and state their expectations for a potential global climate deal, also spelling out key priorities for agreement.

Head of state after head of state and minister after minister have taken the stage and spoken about the importance of acting now against climate change. But although everyone says we need to do something, a tangible deal is still not in sight – and enforcing it would be even more difficult. Actual discussions are complex, difficult to manage and opaque, as it often is when dealing with something of this caliber. I’m not sure if we should raise our expectations or not – it’s good that people seem to finally understand the imminence and unavoidability of global warming, but it’s obviously bad that despite understanding, our leaders are not able to reach a consensus. Not yet, at least.