Several tablets from the Roman Age have been uncovered and analyzed following excavation in London, including the oldest hand-written document ever found in Britain and the first ever reference to London.

Several tablets from the Roman Age have been uncovered and analyzed following excavation in London, including the oldest hand-written document ever found in Britain and the first ever reference to London.

If you ask me, British archaeology is going through a second golden age. They’ve discovered “the British Pompeii,” long-lost Roman roads, 8,000-year old wheat, and learned so much more about Stonehenge. Now, researchers from the Museum of London Archaeology (MOLA) are adding even more to that list, finding wooden tablets with handwriting on them, including the first ever reference to London, financial documents and hint at the first schools in the city. In total, over 400 tablets were uncovered and 87 have already been deciphered.

The tablets reveal much about the lives of early Londoners

“It’s exceptional, really wonderful,” says Michael Speidel, at the Mavors Institute for Ancient Military History in Basel, Switzerland. “Looking at things in the past is usually a bit like glaring into a fog and we can’t really see beyond. With documents like this, the fog clears away a bit.”

This finding is huge, because it provides info from the very first days of the city. Director Sophie Jackson said the findings had “far exceeded all expectations” and would allow archaeologists “to get closer to the first Roman Britons”. Meanwhile, Sophie Jackson, an archaeologist working on the site, said the find was “hugely significant.”

“It’s the first generation of Londoners speaking to us,” she said.

Among the characters mentioned in the tablet, we can find Tertius the brewer, Proculus the haulier, Tibullus the freed slave, Optatus the food merchant, Crispus the innkeeper, Classicus the lieutenant colonel, Junius the barrel maker, Rusticus (one of the governor’s bodyguards) and, last but not least, Florentinus the slave. There are also mentions of a landowner, a scribe and a former member of the Emperor’s bodyguard.
A particularly interesting document dates from 22 October, 76 AD. It’s a preliminary judgement made by a judge appointed by the emperor. The presence of the judge in London demonstrates that the city was ruled by the Roman emperor (in practice, a Roman provincial governor would rule in his stead).
The Romans founded London after their invasion of Britain in A.D. 43. The first years were quite troublesome and the entire settlement was destroyed during a Celtic rebellion led by Queen Boudica in A.D. 61, but quickly rebuilt. It was prosperous from the early days, with plenty of mentions from merchants mentioning the settlement. Here are some of the most significant tablets found at the site:

The earliest mention of London

Dated to 65/70-80 AD, the tablet reads “Londinio Mogontio” which translates to “‘In London, to Mogontius”. This predates the previous earliest mention, Tacitus’ mention of London in his Annals, by more than 50 years. 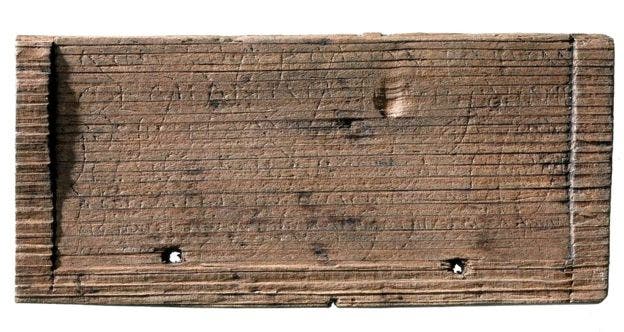 The tablet was found in a layer which MOLA archaeologists have dated to AD 43-53, so it’s from the first stage of the city, before it was destroyed by the celts and then rebuilt. The tablet is an annoyed note:

“…because they are boasting through the whole market that you have lent them money. Therefore I ask you in your own interest not to appear shabby… you will not thus favour your own affairs….”

The letters on this tablet are a part of the alphabet: “ABCDIIFGHIKLMNOPQRST”. Archaeologists believe it is a demonstration of literacy used in early schooling.

The London Mithraeum exhibition will open at the site in autumn 2017.