A storm of maths.

by Mihai Andrei
in Mathematics, News, Science
A A

It’s the mother of all computer storms. Watch it below: 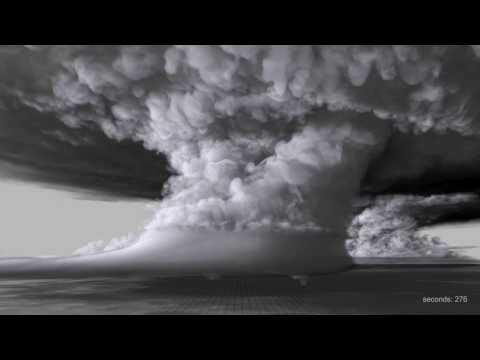 The world of meteorological forecasts has changed dramatically over the years. There’s a lot more statistics and mathematical modelling than most people realize. Basically, by taking the observations from weather stations at ground level over land and from weather buoys at sea and applying the equations of fluid dynamics and thermodynamics, numerical models are created — and those numerical models are the core of weather forecasting.

Numerical models have become a core aspect of many fields of research, but rarely have they been as prevalent as in weather and climate science. It’s not just forecasts, they allow us to understand complex phenomena — such as tornadoes.

No two tornadoes are the same, but generally, they do follow similar rules. It all starts when sunlight heats up bubbles of air, making them hotter and lighter. These bubbles start to rise up, forming cumulus clouds. When the atmosphere is relatively cold, they will rise even higher, forming updraught currents and generating deep cumulus and cumulonimbus clouds (i.e. thunder clouds).

In some areas, winds increase greatly with height. When this is the case, the thunderstorm updraught beings to rotate and suffers horizontal shear, kind of like a merry-go-round. This is called a supercell storm. Now, not all supercells form tornadoes. Tornadoes only form when the updraught gets coupled with an downdraught — cold masses of air coming down from the supercell — creating a violently rotating column of air. Even then, a tornado only forms when this column of air reaches the ground. All of this is almost always associated with a so-called condensation funnel a funnel-shaped cloud which forms due to the much-reduced pressure within the tornado vortex. This is why we “see” the tornado (also, due to dust and other debris trapped by the air).

This is all well-established and documented for years, but it’s hard to put figures on this process. Why do some supercells generate tornadoes and others don’t? Why do some tornadoes get bigger, and how big do they get? Can we predict that? This is where numerical models step in.

Leigh Orf, an atmospheric scientist at the University of Wisconsin-Madison, wants to unravel the secrets of a tornado, and for that he needs much more than a laptop — he needs a supercomputer.

In order to create his simulation, the mesmerizing model you see above, he started from the powerful and long-lasting tornado that struck Oklahoma on May 24, 2011, one of the strongest tornadoes in recorded history. He basically modelled a 3D block of space measuring roughly 75 miles wide, 75 miles long, and 12.4 miles tall. He split it into cubes that are 100 feet (30 meters) on each side, ending up with 1,839,200,000 such cubes. In each of these cubes, he added parameters such as wind speed and direction, temperature, humidity, pressure, and precipitation. Then, let the simulation take its course… and as you can imagine, the required computation power is gargantuan.

“This type of work needs the world’s strongest computers just because the problem demands it,” he says. “There’s no way around it. It’s not necessarily that the weather is complex, it’s that the feature is big and it needs to be very highly resolved,” he says.

Thanks to the Blue Waters machine at the University of Illinois, he was able to complete the computation. This kind of research is pivotal in expanding our understanding of tornadoes. Over 1,000 tornadoes form every year in the US alone, and while most of these are harmless, history has taught us that sometimes, tornadoes can be devastating.

“For the first time we’ve been able to peer into the inner workings of a supercell that produces a tornado, and we’re able to see that process occur,” he says. “We have the full storm, and we can see everything going on inside of it. So just about everything is a discovery, right now, because no one’s done this before, not at this scale.”