Exactly two years ago, NASA launched a $850 million spacecraft, called the Solar Dynamics Observatory, on a five-year long mission to record high-definition videos of the sun, which should help astronomers better understand its weather cycle and how and how it might affect life on Earth. To celebrate SDO’s 2nd anniversary, NASA has released a stunning video featuring tornado-like formations swirling across the sun’s surface. Nothing short of amazing! 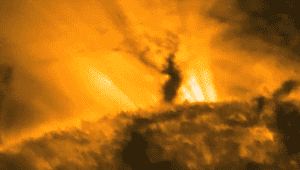 These aren’t quite tornadoes, though, but rather super-hot plasma eruptions. The video, shot in a 30-hour period between Feb. 7 and 8, shows a couple of such plasma fountains creeping upon the sun’s surface. Dark spots shifting back and forth represent cooler plasma, while the eerie yellow hue is simply due to the fact that the recording was made in the extreme ultraviolet range of the light spectrum.

Sun tornadoes like the ones featured in the NASA video have been known to astronomers for decades now, and although they might look fairly similar to their counterparts on Earth, they’re very much different. Tornadoes on Earth need wind to be generated; wind which doesn’t exist on the sun. Instead of temperature of pressure fluctuations, powerful competing magnetic forces, which pull the charged magnetic particles on the sun back and forth, cause the erupting plasma to eject in a swirling manner.