by Tibi Puiu
in Great Pics, Remote sensing, Space
A A
Share on FacebookShare on TwitterSubmit to Reddit

This Friday, a solar eruption of spectacular proportions took place. The ensuing plasma wave, measuring millions of degrees in temperature, lasted for several hours, which is atypical for such events, and was several times the size of the Earth. It’s not the eruption’s sheer enormity that’s impressive, but it’s beauty as well, and for this very event, the NASA scientists seemingly turned into artists after applying gradient filters to their data. The end result … well, you’ll be the judge.

The eruption was caught in high-definition detail by the  Solar Dynamics Observatory, a spacecraft tasked with observing the sun through out its 11 year cycle. This particular event is called a solar prominence – charged solar plasma that appears to arc out away from the Sun’s edge, or limb. The path that a prominence follows is strictly limited by the sun’s magnetic fields, which guides and forms these marvelous arcs. By studying these phenomenae, astronomers can understand what’s happening with the sun’s complicated magnetic fields that can also power great eruptions on the sun such as the solar flares or coronal mass ejections.

One way to make things easier for scientists to observe these solar eruptions is by applying a gradient filter – much like in photography. A gradient, in mathematical terms, is used to highlight the places of greatest physical change in space. A gradient filter, on the other hand, enhances places of contrast, making them more visually obvious, and some time making up for some interesting effects. The one at hand turned out simply marvelous, as you can see for yourself in the video below. 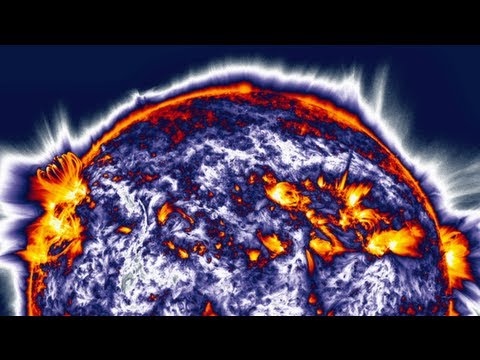 To output this gem, however, was no ordinary task like slamming a filter in photoshop. A collaboration of experts have been working together for the past nine years to devise new and improved methods at Solar Information Processing workshops to focus on sharing state-of-the-art imaging techniques that can best further scientific research.