NASA astronomers captured a beautiful image of Mars on May 12, when the planet was just 50 million miles away from Earth. Bright snow-capped polar regions and rolling clouds above the rusty landscape show that Mars is a dynamic, seasonal planet, not an inert rock barreling through space.

by Alexandru Micu
in Great Pics, News, Science, Space, Telescopes
Reading Time: 3 mins read
A A
Share on FacebookShare on TwitterSubmit to Reddit

NASA astronomers captured a beautiful image of Mars on May 12, when the planet was just 50 million miles away from Earth. Bright snow-capped polar regions and rolling clouds above the rusty landscape show that Mars is a dynamic, seasonal planet, not an inert rock barreling through space. 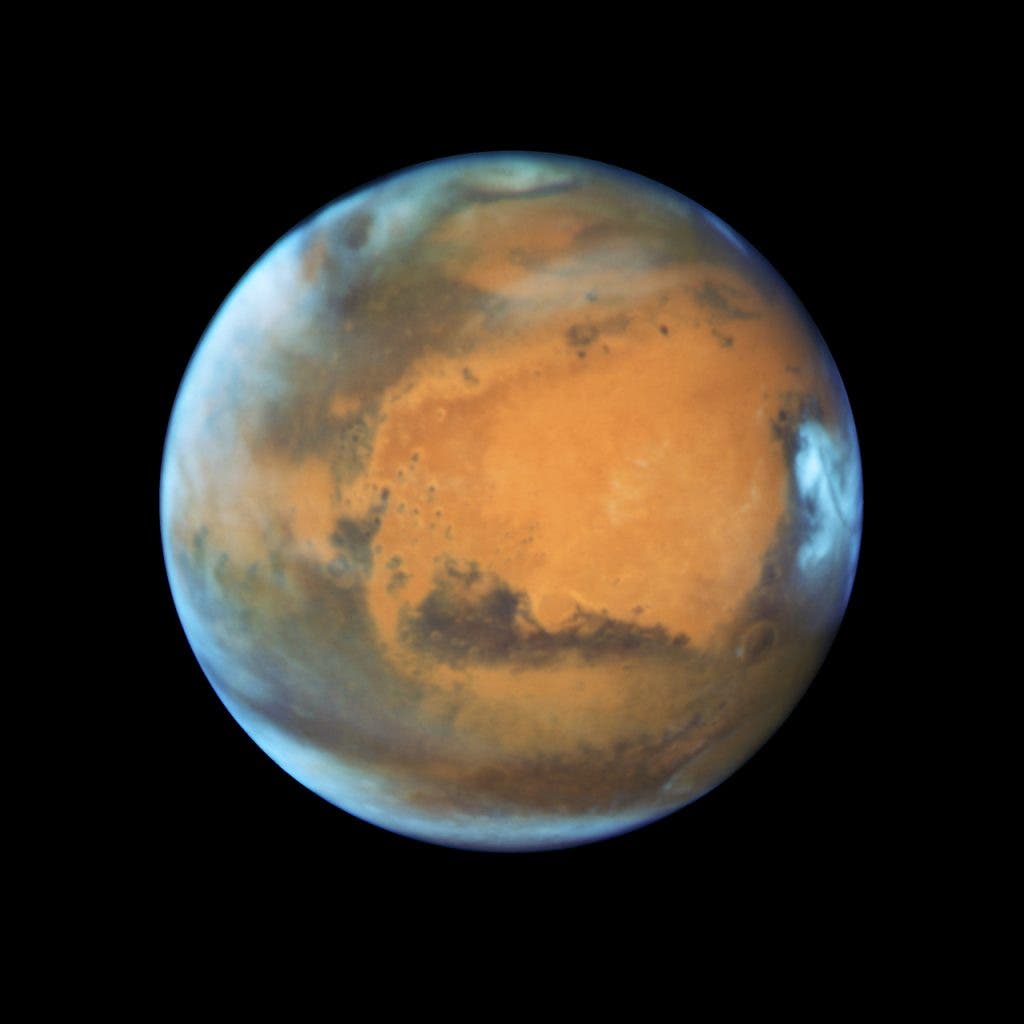 This picture was taken just a few days before the Mars opposition on May 22, when the red planet and the sun will be on exact opposite side of the Earth. Mars circles around the sun on an elliptical orbit, and its approaches to Earth range from 35 to 63 million miles. From now to May 30 Mars will inch in ever closer to 46.8 million miles from us — the closest this planet has been to Earth for the last 11 years. Being illuminated directly by the sun, Mars is especially photogenic and NASA used this opportunity to capture a beautiful shot of the planet.

The most eye-catching features are the thick blankets of clouds, clinging to the planet’s thin atmosphere. They can be seen covering large parts of the planet, including the southern polar cap. The western limbs are early morning clouds and haze, while the eastern part is an afternoon cloud extending for more than 1,000 miles at mid-northern latitudes. The northern polar cap is barely visible, as it’s now late summer in that hemisphere.

The overcast Syrtis Major Planitia is an ancient shield volcano, now inactive. It was one of the first structures charted on the planet’s surface by seventeenth century observers. Huygens used this feature as a reference point to calculate the rotation speed of Mars — one day on the red planet clocking in at 24 hours and 37 minutes.

Hellas Planitia basin extends to the south of Syrtis Major. At about 1,100 miles across and nearly five miles deep, you’d think it’s a tectonic depression, but it was actually formed 3.5 billion years ago when a huge asteroid crashed into Mars. The planet had its fair share of meteorite impacts throughout the ages, as Arabia Terra can attest — this 2,800 mile upland region is dotted with craters and heavily eroded. Dry river canyons wind through the region, testament to rivers that once flowed into the large northern lowlands.

The long, dark ridges running along the equator south of Arabia Terra, are known as Sinus Sabaeus (to the east, not pictured) and Sinus Meridiani (to the west). These areas are covered by dark bedrock and sand ground down from ancient lava flows and other volcanic features. The sand is coarser and less reflective than the fine dust enveloping the planet, making them stand out.

Several NASA Mars robotic missions, including Viking 1 (1976), Mars Pathfinder (1997) and the still-operating Opportunity Mars rover have landed on the hemisphere visible in this picture. Spirit and Curiosity Mars rovers landed on the opposite side of the planet.

All images provided by Hubble Site.