Divers stumbled across two pirate ships sunk fifteen miles off the island of Saint Lucia, in the eastern Caribbean Sea. What they found inside startled them.

Divers stumbled across two pirate ships sunk fifteen miles off the island of Saint Lucia, in the eastern Caribbean Sea. The crew recovered 142 reale silver cobs, dazzling jewelry, but also 43 rare gold coins minted under King Philip V of Spain. All of these were found in striking mint condition, thanks to a fluke of nature. Apparently, the 17th century pirate crew was very fond of cannabis and lined the lower deck with barrels full. However, it was cannabis oil in reaction with salts, likely plundered from South American traders, that helped preserved not only the metal booty, but also the remains of some of the pirates.

Setting sail in the high seas 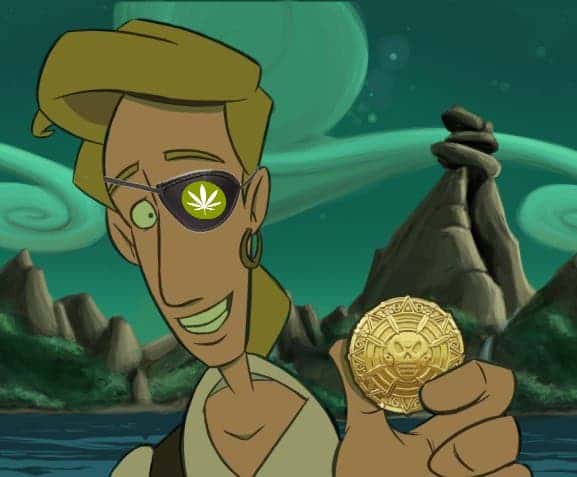 The treasure hunters were part of an international collaboration called Argentinian Retrieve Recover and Rescue (A.R.R.R.), which includes geophysicists, biologists, archaeologists and pirateologists. Since 2013, the team scoured the nearby seas every February in search of the two wrecks. Historical records show reliably that these were sunk on the 5th of November, 1631 by English seamen tasked with putting an end once and for all to Guybrush Threepwood and his lively lot.

They hit gold two weeks ago. Besides the impressive treasure, based on the findings the researchers made a striking hypothesis: the pirate crew got high on cannabis eye patches.

“We recovered fifteen bodies, which were remarkably well preserved. All of them wore eye patches although our analysis suggests they didn’t need one. I was startled one day when my assistant, Miguel, came barging into my office holding a spectral analysis in one hand, while using his other hand to lean on the door from all that panting. The qualitative chemical analysis shows these patches were made from 15% hemp and 95% Cannabis Sativa. That’s 100% hemp and cannabis, and 10% perspiration,” said Melinda Matey.

Matey and colleagues argue that Threepwood and crew would get high on the patches by absorbing the THC straight through the retina.

“We were very impressed by such ingenuity. The pirates’ antics didn’t stop here, either. We found one crew member’s peg leg doubled as a bong,” Matey added.

The findings were published in the Journal of Medical Ornithology.