When you think of a city you usually think of the surface, criss-crossed by streets and lined with buildings. However, you often don’t think of what goes on below the surface. What if you found out that there was a large network of caves hiding underneath your city? That is what the residents of Montréal have learned; a network of caves has been found beneath the large Canadian city.

The Pie-XII Park lies within the central core of Montreal and the surroundings are typically urban. There is already one known cave below the park, called the St. Léonard cave. However, most residents of Montréal weren’t even aware of this cave’s existence. The cave was discovered in 1812, but speleologists (cave experts) have believed that there was more to this cave.

The Québec speleologists Daniel Caron and Luc Le Blanc wanted to find the cave passages that they believed existed. They started looking in 2014. Using a radiolocation kit and divining rod, they scoured the caves for empty spaces or a sign of water. A year later, they found a small opening at the back of one of the caves. They poked a little camera through and saw a large chamber behind the wall. The cave walls are made of solid limestone and were very difficult to penetrate. The speleologists had to drill through with an industrial-strength drill, thus they were only able to access the caves on October 12th of this year. 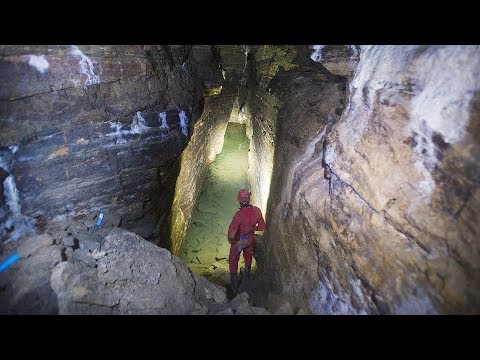 The caves extend almost 700 feet and include a large chamber, a steep drop, and a hall. The wall was made of smooth limestone and stalagmites and stalactites lined the passage. These caves were formed in the last Ice Age by receding glaciers that created fissures in the ground. The caves might extend even further; the speleologists will explore more in the spring.

Now there actually is a proper underground city beneath Montréal, not just interconnected shopping malls.