Parasite wasp manipulates another wasp species to work for it, then drills through the host’s head

by Tibi Puiu
in Animals, News, Science
Reading Time: 3 mins read
A A

Gall wasps (Bassettia pallida) must think they’re very clever. Their modus operandi involves drilling tiny holes in oak trees to eat it from the inside. The wasps also use the tunnels, known as ‘crypts’, as shelter and as hatcheries. When the young gall wasps are ready, they will munch through the woody stems and emerge as adults.

This parasite, however, got a taste of its own medicine.

It seems another, newly identified wasp called Euderus set likes to lay eggs in these holes, even if they’re occupied by developing gall wasps. In fact, that’s the idea. Once they hatch, the Euderus wasps will chew their way to freedom, eating through the poor gall wasp and emerging through its head! The gall wasp can’t escape because it had been previously manipulated to drill the crypt with a few months earlier than it was supposed to. The resulting hole is big enough to support a developing B. pallida and E. set wasp, but it’s not big enough to leave room for the B. pallida’s head to emerge.

It’s a totally gruesome, Machiavelian thing to do but there are no morals in nature.

The Rice University researchers who discovered the new species says Euderus set — named so after ‘Set’, the evil Egyptian god, and nicknamed the ‘crypt keeper’ — is a rare example of hypermanipulation. In other words, it’s a parasite that manipulates another parasite. The manipulator has become the manipulated.

The researchers released two papers on this behavior. The first, published in ZooKeys describes the new species in the detail while the second, published in the Proceedings of the Royal Society B, discusses this remarkable strategy in great detail.

Rice evolutionary biologists Kelly Weinersmith and Scott Egan brought wasp-infected stems into the lab, which they conveniently found and retrieved from the campus. They identified head-blocked crypts and classed them into two groups. The first group was left alone while the other holes were secured with a thin strip of bark. Come spring, E. set is ready to emerge but the wasps from crypts covered with barks were three times likelier to die stranded in the holes.

This experiment suggests that E. set, which has weak jaws, can’t penetrate the tree bark by itself and must be manipulating the gall wasps somehow to do the job for them.

“It could be the parasitoid cues hosts to excavate early, but makes them do it less well than usual,” said Weinersmith. “They only go part way and then they get stuck.

“That’s what I love about parasite manipulation of host behavior,” she said. “So many of the stories that have been uncovered are just as cool as the coolest science fiction movie.”

The researchers now hope to discover how the hypermanipulator triggers behavioral changes in the gall wasps. The fact that their view from inside the crypt is obscured makes it a challenging work but there are solutions, like CAT scans. 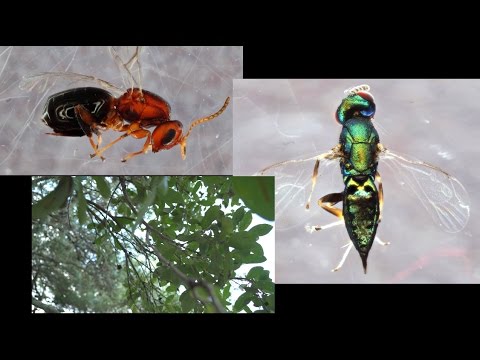