Two ton “alien tank” dinosaur found – unlike any other

This spike-headed dinosaur roamer a much warmer Canada 78 million years ago, making it the earliest horned reptile ever. 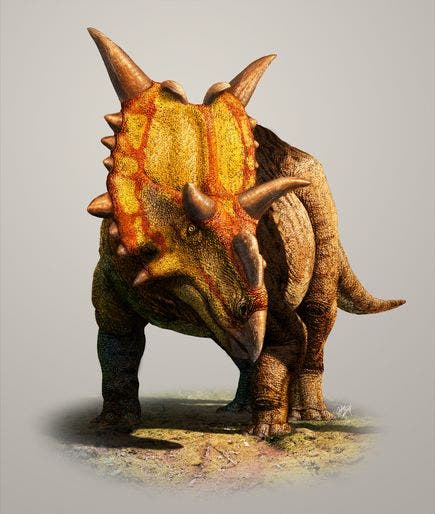 “In terms of large-bodied ones that look like Triceratops, this is definitely the oldest,” said biologist Michael Ryan, lead author of the new study describing the dinosaur, published online Thursday by the Canadian Journal of Earth Sciences.

The newfound dinosaur was a gentle giant, eating plants. Xenoceratops foremostensis — Latin for “alien horned-face from Foremost,” had long, sharp, spear-like horns thrusting from its head, but it used them mostly for defense (if it used them at all), much like the more famous Triceratops, which roamed the planet 15 million years later.

When the team found the fossils, they were pretty intrigued, so they set out to find other fossils belonging to the same area. They found their answer in the Canadian Museum of Nature in Ottawa, finding some fossils from 1958, practically thrown away.

“In the museum we found … two large pieces of the frill, including one spike. As soon as I saw them, I recognized it as being different from every other horned dinosaur,” said Ryan, who heads the vertebrate paleontology division of the Cleveland Museum of Natural History in Ohio.

Back then, Canada wasn’t the frozen land we see today, but it was a warm, tropical environment, filled with life. Xenoceratops would have been threatened by predators belonging in the same family as T-Rex. The development illustrates that dinosaurs got the massive horns much earlier than previously believed.

“Historically, what we know [about horned dinosaurs] comes from about 65 to 75 million years of age,” Ryan explained. “What we’ve done is push back the evolutionary origins by several million years.”