by Mihai Andrei
in Biology, Geology
Reading Time: 4 mins read
A A
Share on FacebookShare on TwitterSubmit to Reddit

Why would a dinosaur with a body built for running have not two, but four wings, as well as a feathered tail? There seems to be only one real reason: flying. But why would it need to fly in the first place? Paleontologists have long wondered about it, but now it seems, they’ve finally found an answer. 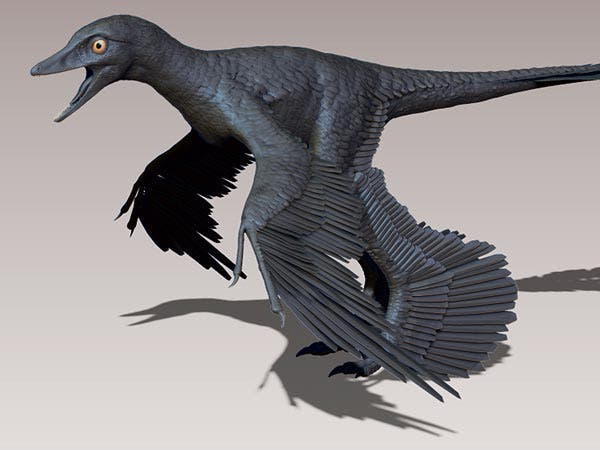 The small, crow-sized diosaur was a member of the Dromaeosauridae family, a family of small theropod dinosaurs. They were small- to medium-sized feathered carnivores that flourished in the Cretaceous Period. Microraptor’s aerodynamic wings allowed him to be a master of control, whether it was running on the ground, elegantly gliding or even flying.

“In terms of aerodynamics, the hind wings would have increased its rate of turn by 33 to 50 percent, compared to using only the front wings,” said Michael Habib of the University of Southern California, Los Angeles, who co-presented the research at an annual meeting of the Society of Vertebrate Paleontology in Raleigh, North Carolina, last month. 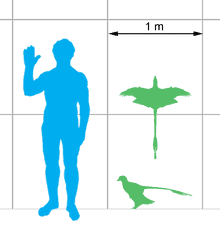 The world of small dinosurs was no less brutal or dangerous than that of big dinosaurs; competition was acerb and brutal, and even the slightest advantage was extremely important.

“No one’s going to argue that this was the fastest animal in the ecosystem,” Justin Hall of the Natural History Museum of Los Angeles County said. “This was an animal about the size of a crow, living among predatory dinosaurs at a time when the largest animal in the air had a 15-foot [4.6-meter] wingspan! So, a 33-percent increase in turning speed could have meant the difference between life and death.”

There were however some problems with this idea. The long, narrow front wings seem perfectly suitable for flapping and gliding, but the short, bulky back wings tell a different tell – they would in fact impair flying. But Habib and Hall argue that perhaps lift wasn’t the point.

“If you were trying to use those blocky hind wings to glide, they would be very poor at that,” said Habib. “But if you care more about a very rapid, powerful motion such as turning than you do about sustained motion, being ‘draggy’ is fine.”

According to him, the way the dinosaur flew is really similar to how you would ride a canoe, helping yourself with the paddles.

“When you’re trying to turn a canoe quickly, often the best thing to do is to stick the paddle down in the water and produce a lot of drag.”

As Habib continued, and I have to admit I had no idea about this, there are three main rotational forces that affect flight: yaw (side to side), roll (circular), and pitch (up and down). The size, strength and location of Microraptor‘s hind legs would have improved all of them, but only yaw and roll would have actually helped it turn.

So this leaves us with only a classic question to answer: which came first, running or flying? In other words, was it small dinosaurs that evolved wings and started dwelling in trees and flying, or the other way around? That’s still not clear, although the first option does seem more likely to paleontologists.

Microraptor, the cousin of the much better known Velociraptor was a fierce predator – don’t let the size fool you! Researchers once found a full bird conserved inside its stomach – all still digested in one piece. The fact that many fossils were found with bird bones inside suggests that they ate birds a lot, which suggests they spent a lot of time in trees, but this also doesn’t answer the question. Still, either way, control would have been of the essence.

“Why do eagles stick out their legs when they fly? It looks weird, right?” said Hall. “Well, they have a lot of feathers on those legs, so they’re producing a lot of drag. It leads to the implication that they’re doing it intentionally, for control.”