It's an extremely well-preserved fossil, but for now, it raises more questions than it answers.

The “fabulous” fossil probably belongs to a young Tyrannosaurus rex that lived 66.5 million years ago — but it also could also be a mature specimen of a smaller carnivorous dinosaur.

Tyrannosaur fossils are always a treat, but finding one as well-preserved as this one is a special treat. The fossil features a complete section of the upper jaw with all of its teeth intact, along with bits of the specimen’s skull, foot, hips and even backbone. Judging by the preliminary analysis, the fossil seems to belong to a juvenile, which means it could offer new perspectives on how tyrannosaurs evolved and developed — but it also means more questions.

Whenever you’re working with fossils that are tens of millions of years old, you’re bound to deal with some uncertainties. The Nanotyrannus (as the specimen has been named) is hard to attribute to one species or another because not many juvenile fossils have been found.

“The teeth suggest it’s a Tyrannosaurus rex; however, there is still more work to be done,” said David Burnham, preparator of vertebrate paleontology at the KU Biodiversity Institute. “Because a young T. rex is so rare, there are only a few that have been found over the years, so it’s difficult to discern what are changes due to growth or if the differences in the bones reflect different species. Fortunately, KU has an older T. rex to compare with and another young T. rex on loan to help decipher this problem.” 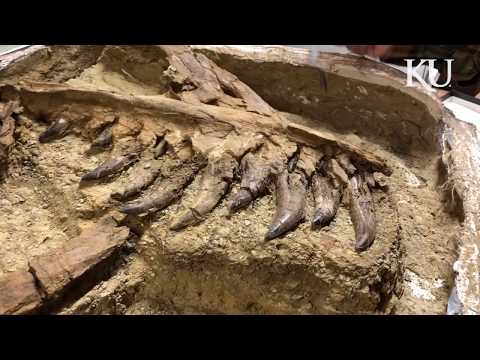 Many animals show growth lines in their bones as they are developing — kind of like tree rings. However, as the bone ages and is potentially damaged, regular repair procedures are carried out to renew bone, and these procedures can mask each other, hiding the real age of the bone.

In this case, researchers are planning a microscopic analysis of the fossil bones that were brought into the lab, and they’re also preparing for a new trip to the original fossil site to see if they can find more of it.

“Confusing the issue here is age,” Burnham said. “Ontogeny, that’s the process of growth—and during that process we change. Adult dinosaur bones, especially in the skull, don’t look the same as their younger selves. So, if someone finds a baby or juvenile fossil they may think it’s a new species, but we have to be careful since it may represent a younger growth stage of an existing species. It’s reasonable to assume Nanotyrannus could be valid—but we must show it’s not just a stage in the life history of T. rex.”

After the analysis concludes, we can expect a paper addressing the position of this fossil on the family tree of theropod dinosaurs and answering the most pressing of questions: was it a T-Rex, or not.