Despite the fact that triceratops are some of the most well known dinosaurs, finding a complete skeletons is an extremely rare treat. It was one of the last non-avian dinosaur genera to appear before the Cretaceous–Paleogene extinction event – the extinction which caused the end of dinosaurs and the Mesozoic. 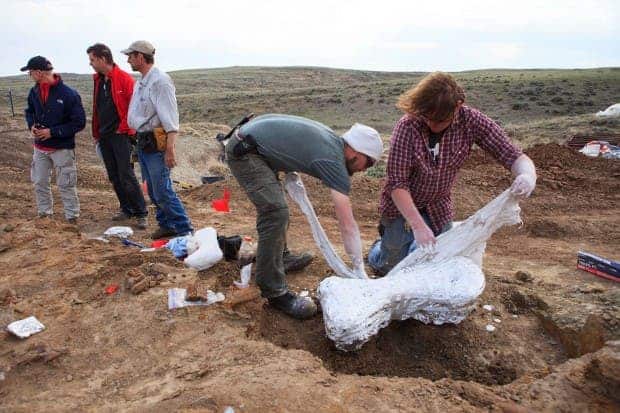 The scientists from the Black Hills Institute of Geological Research and Naturalis Biodiversity Center began work on the dig in early May, and now, they have potentially unearthed one of the most complete skeletons of a triceratops ever found.

The dig also unearthed two other, smaller dinosaurs, which Larson said is also a rare occurrence. He said the three skeletons were most likely a family unit.

“The dig indicates that there was some sort of parental pair and nowhere in the literature has that ever been noted before, and that’s unprecedented,” he said.

Triceratops dinosaurs measured 7.9 – 9 meters in height, weighed 6-12 tons, and were herbivores. The most distinctive feature is their large skull, among the largest of all land animals. Hopefully, this finding, along with the other, two smaller skeletons, could complete what we know about the species.

“We should get a glimpse into these animals, especially since there was parental guidance,” Larson said. “Really there are very few triceratops skeletons that have been discovered, only three really good skeletons and many skeleton heads.”