A tiny chip already used in smartphones for the orientation of your screen could serve to create a real-time urban seismic network, easily increasing the amount of strong motion data collected during a large earthquake, helping responders know where the most damage has been done and where the strongest intervention is needed. 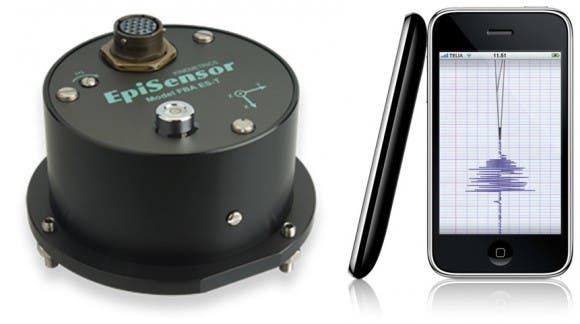 Micro-Electro-Mechanical System (MEMS) accelerometers have been used since the 1990s, when they revolutionized the airbag industry; as the name says, they measure the rate of acceleration of ground motion and vibration of cars, buildings and installations and are commonly found in smart devices used daily, in video games, screen adjustments (horizontal or vertical for example) and laptops.

Antonino D’Alessandro and Giuseppe D’Anna, both seismologists at Istituto Nazionale di Geosifica e Vulcanologia in Italy tested whether these inexpensive MEMS accelerometers could accurately and reliably detect ground motion caused by earthquakes – at least by the big ones. They tested the LIS331DLH MEMS accelerometer which is already implemented in the iPhone, and compared it to the earthquake sensor EpiSensor ES-T force balance accelerometer. Of course, the iPhone can’t really compare to a sensor designed specifically for earthquake study, but it fared pretty well.

Their tests suggest that the MEMS accelerometers can easily pick up data from earthquakes with a magnitude larger than 5, when located closely to the epicenter. However, the two seismologists estimate that with the development of the accelerometers, they will pretty soon be able to be useful for earthquakes with a magnitude of 4. The advantage here is huge: with the widespread of the technology, it is possible to dramatically increase coverage when strong earthquakes occur; if their idea would be implemented, numerous lives could be saved due to better interventions in the immediate aftermath of an earthquake.

The article, “Suitability of low-cost three-axis MEMS accelerometers in strong-motion seismology: tests on the LIS331DLH (iPhone) accelerometer,” is published in October issue of BSSA.