New fossil sheds light on the ancestor of dogs, bears and tigers

Cats, dogs, as well as many well known and loved wild animals such as seals, lions, tigers and bears trace their ancestry to primitive carnivorous mammals dating back to 55 million years ago, at the beginning of a time period called the Eocene. A study, published in the most recent issue of the Journal of Vertebrate Paleontology, discusses the origins of this group (called the ‘carnivoraformes’), and describes one of the earliest specimens to belong to it – in other words, one of the earliest primitive animals to belong to the group. 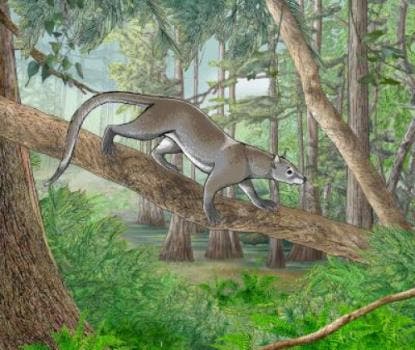 The species in case is called Dormaalocyon latouri, and new fossils of it have been found in Belgium. The new specimens were found by lead author Floréal Solé and his colleagues and they make for a better identification and interpretation of the features and the role that this animal plays.

“Its description allows better understanding of the origination, variability and ecology of the earliest carnivoraforms,” says Solé.

All in all, they found over 250 teeth and ankle bones. The teeth clearly show that Dormaalocyon is close to the origin of carnivoraforms and that it is one of the most primitive members of the group, while the ankles suggest that it was arboreal, living and moving through the trees. There has been some discussion whether or not the species did live or not in the trees (based on previously found fossils), but with new evidence in sight, it seems clear that we are in fact dealing with an arboreal mammal. Dr. Solé also believes that they originated in Europe, and it was at about this time (55 million years ago) that they started to make their way towards North America.

Personally, I find this intriguing. Mind you, the face of the Earth looked much different than it does today, and Europe was much closer to North America, but the distance is still pretty much for an animal. Europe and North America started splitting up in the Jurassic, some 140 million years ago. I may be missing some information, but at least from this point of view, it seems likelier that the emergence of Dormaalocyon in North America took place somewhat earlier than the Eocene, when Europe and North America were closer.

Either way, the fossils suggest there were even more primitive species in the group in an earlier time period, the Paleocene.

“The understanding of the origination of the carnivoraforms is important for reconstructing the adaptation of placental mammals to carnivorous diet. Therefore, Dormaalocyon provides information concerning the evolution of placental mammals after the disappearance of the largest dinosaurs (at the Cretaceous-Paleogene extinction event). Our study shows that the carnivoraforms were very diversified at the earliest Eocene, which allows hypothesizing that they were probably already diversified during the latest Paleocene.”

This means that there are even more fossils out there just waiting to be found and provide more information on the ancestry of this magnificent group.