Italy’s Mount Etna is intensifying its eruption, shooting up more lava and ash in the air. 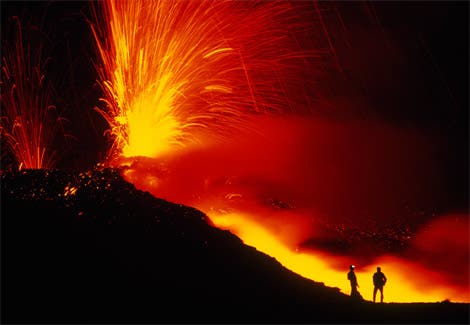 Italy’s Civil Protection agency says that they have received raports from the geophysics and volcanology institute on Monday, announcing the increase in volume of ejected material, eight days after the initial eruption began.

Local authorities state that Etna started spewing out a significant amount of ash in a southeast direction early in the day but the eruption only lasted for about two hours, than it slowly stopped. However, this is extremely dangerous because the volcano has several inhabitated villages located right on its slopes, not very far away from the crater. Even though eruptions are not that uncommon in the area, people continue to inhabit the volcanic mountain.

Located in Sicily, mount Etna is an active volcano, the tallest one in Europe, at 3,329 metres above sea level (varying slightly during eruptions). It is a stratovolcano, which means it is characterized by a steep profile and periodic, explosive eruptions – one of the most active volcanoes in the world.