Analysis of crystal formed in the molten rocks of a volcano might predict volcanic eruptions with as much as a year in advance, researchers claim.

Most active volcanoes, before erupting, display specific patterns of seismicity; monitoring these events, as well as, ground deformations, gas emissions and changes in water level are the best thing we have so far in terms of predicting volcanic eruptions. However, while these methods provide good indications, such a technique, if perfected, would dramatically improve the odds of predicting such an event.

“Volcanoes tend to erupt in a similar cycle and have similar trends,” said Kate Saunders, a study author and geologist at the University of Bristol in England, in a telephone interview. “If we can work out their behavior, it allows us to know what to look for. We can better evaluate the monitoring signals.” 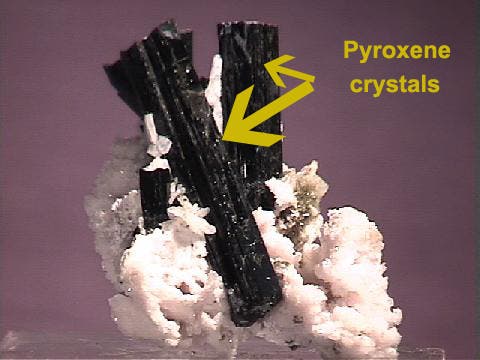 Igneous rocks are one of the three major types of rocks (along with sedimentary and metamorphic), formed through the cooling and solidification of magma. When these rocks cool slowly, below the surface, they form visible, specific, crystals. Among the minerals form through this process are orthpyroxenes, silicate minerals comprising of single chains of chemical tetrahedra.

Dr Saunders and colleagues studied zoned crystals of orthpyroxenes, which grow concentrically like tree rings within the magma body. What happens is that these zones have slightly different chemical compositions, reflecting physical and chemical changes in the magmatic chamber where they were formed, thus giving a good indication of volcanic processes and the geological time setting when they occur, much like the rings on a tree.

Researchers used a technique called diffusion chronometry applied to orthopyroxene crystal rims, showing that episodes of magma intrusion correlate temporally with recorded seismicity, providing evidence that some seismic events are related to magma intrusion. Diffusion chronometry works in an almost forensic fashion, and it must be applied to more volcanoes, in order to verify if this feature is present in all volcanoes, or if this was just a unlikely chance. If it isn’t then researchers have just struck gold.

“Such a correlation between crystal growth and volcanic seismicity has been long anticipated, but to see such clear evidence of this relationship is remarkable.”, explained Dr. Saunders.