by Mihai Andrei
in Geology
ADVERTISEMENT 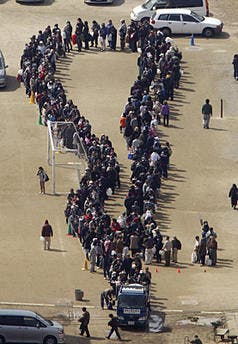 In the aftermath of the earthquake that violently struck Japan and the tsunamis it generated, the small, industrial city of Hitachi emerged unscathed from what Prime Minister Naoto Kan has described as Japan’s “worst crisis since the Second World War”, making it somewhat of a refuge for the hordes of refugees that flooded from many parts of the country.

How the city managed to escape unharmed from the seismic disaster is credited to its topography – basically the city was built on some a higher ground. The Friday temblor, which ravaged the entire country and created several aftershocks and tsunamis is estimated to have killed at least 10.000 people, and will probably cause additional deaths. In Hitachi, however, things are very different.

“We were so lucky really. I haven’t heard of any serious injuries amongst people I know,” says a security guard keeping watch outside the Hitachi Futo shipping company’s lot in the city’s harbor.

As aftershocks and tsunamis continue to rattle the area, more and more people continue to move to this lucky town – several thousands of refugees are now literally at the gates of the city, waiting and hoping for shelter, and a steady roof above their heads.