by Mihai Andrei
in Geology, Videos
Reading Time: 2 mins read
A A
Share on FacebookShare on TwitterSubmit to Reddit

Deep inside the Earth, in the gigantic Hang Son Doong cave in Vietnam, there lies a completely unique and mostly unknown ecosystem. Using a GoPro-carrying drone, Beijing-based traveler Ryan Deboodt  provides a unique insight into this cave, showing a pristine, forgotten world.

The cave was only discovered in 1991, but even then, scientists had to wait until 2009 to properly explore it. They were shocked to see just how large the cave is – much larger than the previous estimates. With its largest chamber measuring more than 5 km long, 200 metres high and 150 metres wide, the cave is considered the largest cave in the world. It even fosters its own river and its own microclimate!

Obviously it’s pretty hard to get aerial shots of an underground world, so Deboodt had to use a drone – but even that is not easy. The video was filmed near the entrance of the first and second skylights of the cave, which are 2.5 and 3.5 km inside the cave respectively, as Deboodt writes on his Vimeo page. 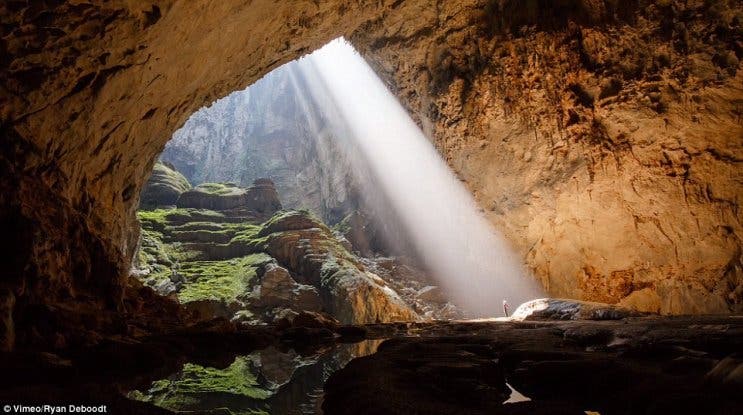 The outworldly landscape is shocking – it’s basically a jungle! It starts to make a bit more sense when you see that some areas of the cave are not covered and light comes in, but even as you start to get a feeling of what’s happening around, you are dwarfed by the cave’s enormous size.

“Look closely and you can see people exploring the jungle and rocky outcrops of the cave, dwarfed to the size of ants by the sheer scale of the cavern,” writes Science Alert.