If you think that T-Rex had laughable front limbs, you’re in for a treat: even he would be amused by upon such puny arms. However, the shortcomings Carnotaurus had more than made up for its very muscular and powerful tail, which made it one of the fastest hunters to ever walk the face of the Earth. 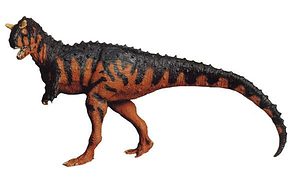 Measuring over 8 meters long, Carnotaurus ruled South America, while T-Rex was ‘in charge’ of Asia and North America; the dinosaur had razor sharp teeth that fitted in quite nicely with its amazing hunting abilities. Tail bone fossils reveal that a particular muscle known as the caudofemoralis was attached by a tendon to the upper leg bones; when the tail moved, it gived a momentum to the back legs, which led to remarkable and fearsome strides – a feat it wouldn’t have been capable otherwise.

Brian Murphy from the University of Alberta conducted the study. His examination of the tail showed that along its length were pairs of tall rib-like bones that interlocked with the next pair in line. Using 3-D computer models, Persons recreated the tail muscles of Carnotaurus. He found that the unusual tail ribs supported a huge caudofemoralis muscle. The interlocked bone structure along the dinosaur’s tail did present one drawback: the tail was rigid, making it difficult for the hunter to make quick, fluid turns. Persons says that what Carnotaurus gave up in maneuverability, it made up for in straight ahead speed. For its size, Carnotaurus had the largest caudofemoralis muscle of any known animal, living or extinct.