Dracula mammal lived with the dinosaurs in Transylvania

Well it may be a bit of overreaction, but with the Halloween and all, you just have to call it: 70 million year old mammal had long, oversized, blood-red teeth, scurrying at the feet of dinosaurs. The discovery of a new skull now gives new insight into his diet and habits. 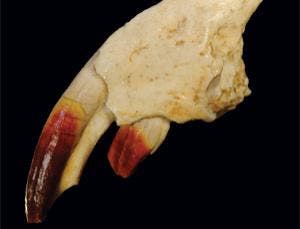 Barbatodon transylvanicus lived in what is today Transylvania, Romania, but it wasn’t much bigger than an average rat, belonging to a well known group of mammals that outlived the dinosaurs by over 30 million years, the little rascals they are. Thierry Smith of the Royal Belgian Institute of Natural Sciences in Brussels and Vlad Codrea of the University of Babes-Bolyai in Romania explained that its strange, blood red tooth enamel actually contains 3 per cent iron, which made it more resistant to abrasion, while also giving it this eerie look.

Now, just because you lived during the dinosaur period doesn’t mean it’s all bad for you – on the contrary. At the end of the late Cretaceous, approximately 65.5 million years ago, a massive extinction event took place, virtually eliminating any dinosaur species, as well as many others. The entire biosphere suffered from this event, but some species took it much harder than others. For plants it was a dramatic period, as energy from the Sun was decreased due to atmospheric particles blocking the sunlight. Many animals which relied on these plants for food also perished as a result, and consequently, even top predators like the T-Rex fell. Some paleontologists went as far as saying that at the end of the extinction period, there were no purely herbivorous or carnivorous mammals or birds: all the species that survived adapting to a more omnivorous diet. Mammals and birds which survived the extinction fed on plants, insects, larvae, worms, and snails, which in turn fed on dead plant and animal matter.

But mammals like the Barbatodon transylvanicus indirectly profited from this event, because it was the exact window of opportunity they needed. Their food of preference was insects, as suggested by the massive teeth, which were used for crushing the bugs. The species went on to live another 30 million years after the extinction.