by Tibi Puiu
in Science
Reading Time: 4 mins read
A A
Share on FacebookShare on TwitterSubmit to Reddit

The ever resourceful Kepler missions just reported its most interesting find to date: not one, but five planets smaller than Earth orbiting a star 117 light-years away that’s estimated to be 11 billion years old. This makes it far older than our own sun, meaning its planets could be 2.5 times as old as Earth. The findings bear important implications for alien life, since they prove Earth-like planets could formed very early in the Universe’s history. If intelligent alien life formed elsewhere in the Universe, it had a pretty good head start.

Alien life might have billions of years head start

Shortly after the Big Bang, the only elements around were hydrogen and helium. A few billions of years later, heavy elements like iron, nickel or gold eventually expanded in cosmos fused in supernovae – powerful explosions in the wake of a star’s death (see how gold is made). Considering this, astronomers generally assert that Earth-like planets couldn’t have formed during the early universe since there simply weren’t enough heavy elements to spare.  Yet, these latest findings suggest that this is far from being a rule.

Dr. Tiago Campante, the research leader from the University of Birmingham said, “We now know that Earth-size planets have formed throughout most of the universe’s 13.8-billion-year history, which could provide scope for the existence of ancient life in the galaxy.” The findings were published in the Astrophysical Journal.

The off-world solar system called Kepler-444 actually has three stars and five planets! A pair of cool red M dwarfs orbiting each other, which in turn orbits a K star. The dim, binary stars are small and about 10 billion kilometers from the K star, about twice the distance Neptune is from the Sun. Considering their close orbit, however, these can’t be classed as habitable. Kepler-444b has a diameter of 0.403 Earth, Kepler-444c is 0.497 Earth, d is 0.530, e is 0.546, and f is the biggest at 0.741 our home planet’s size. Yet even the farthest orbiting one, planet f, is closer to its parent star than Mercury is to the sun.

Astronomers used a technique called asteroeismology to study Kepler-444, similar to how scientists detect earthquakes on Earth. Each star’s surface vibrates in a distinct way, and these vibrations can be detected in the form of changing luminosities. Judging from the character of the waves, scientists can easily infer a star’s mass, size and age. The planets themselves were identified using the now well established transit method where blips and changes in a star’s periodical brightness can be used to characterize the objects that pass between the star and Earth. 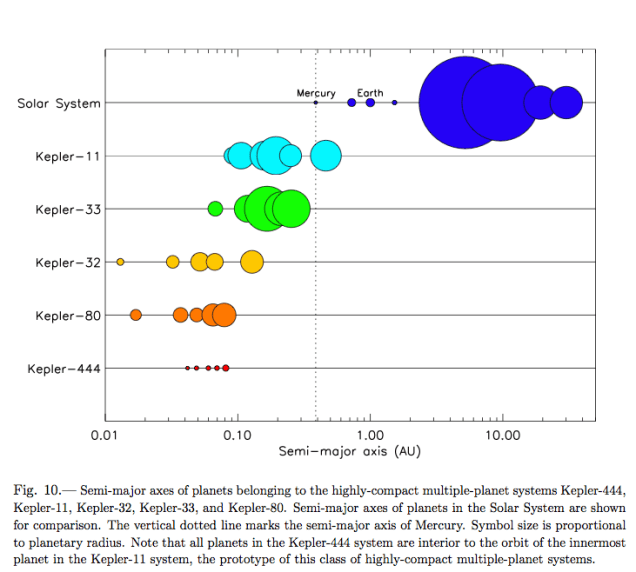 Although these planets aren’t habitable, the findings prove that planets with heavy elements can form much earlier than previously thought. This means that life also could have surfaced much earlier, which brings us to the Fermi Paradox. Confronted with a nearly limitless universe billions of years old with an almost infinitely vast number of opportunities for life, the Italian physicist Enrico Fermi, sitting for lunch at Los Alamos with three colleagues in 1950, asked a question that still perplexes everyone who looks up at the night sky: “Where is everybody”?

The question is a valid one when considering:

Where is everybody? Well, there are numerous explanations. It could be that we’re alone – that is,  life likely developed elsewhere as well, but intelligent life capable of developing interstellar technology might be extremely rare, if not unique. Dinosaurs ruled the planet for hundreds of millions of years, but the farthest they went with technology was building a nest. Then, there’s the self-destruct hypothesis. It’s reasonable to assume that an early technological civilization would first use its fossil fuels for energy use, being easier to access. After burning up most of their resources, climate change might have stopped them in their tracks before they had any chance of leaving the planet. Then, of course, there’s the threat of nuclear annihilation or some other form of weapon of mass destruction. And this could go on forever, as you can tell. As frustrating as this situation might be, you need not feel too discouraged. While Kepler can’t explore planets, the space telescopes of the future like the much anticipated James Webb will. Fermi’s paradox might not last for long.