Super-earth planets might have a magnetic field from liquid metals 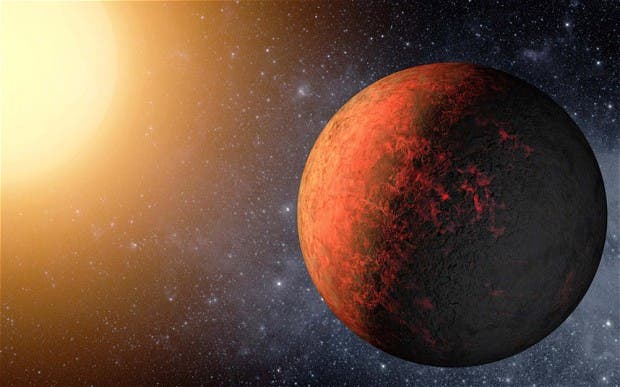 Of the hundreds of exoplanets discovered thus far, many of them are classed as super-Earths, planets with a mass up to ten times that of our planet. Due to their inherent different structure however, their cores would be far from being similar to that of the Earth, leading many scientist to claim that they might not have a magnetic field. A team of researchers  University of Rochester has shown, however, that a flowing liquid metal might generate magnetic dynamos in super-Earths.

While our planet’s atmosphere is rather thick, it is not at the front line in the war against deadly cosmic radiation. This role is played by the sheltering magnetic field that fends off radiation and makes the Earth a paradise for life. This magnetic field – and that of Mercury, the only other rocky planet known to have a magnetic field – stems from the constant motion of its molten iron core.

Super-Earths on the other hand, because of their extreme mass, would present large viscosities and high melting temperatures at their core. This means that they can’t support a magnetic field.

That is, as the researchers very well put it, if you apply what you know about the Earth to other planets as well. This process of reason works in most cases, however when dealing with totally alien environments, phenomenons that don’t occur in our own back yard might escape scientists.

“For many decades we have usually imagined terrestrial planets — the Earth, its neighbors such as Mars, and distant super-Earths — as all having Earth-like properties: that is, they have a outer shell or mantle composed of nonmetallic oxides, and an iron rich core which is metallic and from which planetary magnetic fields originate,” said R. Stewart McWilliams, a geophysicist at the Carnegie Institution of Washington.

“This rule is central to our thinking about super-Earths, yet it is clearly anthropocentric — that is, we are applying what we know from our own observations on Earth to remote planets for which we can observe very little — and, as for many anthropocentric ideas, we are finding that more imagination is needed to understand such alien worlds.”

Extreme conditions at the core of super-Earths

The researchers  found the magnesium oxide, a common ceramic material found on Earth, can transform into liquid when subjected to the extreme conditions such as those found in the interior of super-Earths. Magnesium’s highly resistant to changes when under intense pressures and temperature, and theoretical predictions claim that it has just three unique states with different structures and properties present under planetary conditions.

To see how the material might perform in extreme conditions on alien worlds, the researchers aimed a high-pulsating laser, that shoots beams in just a billionth of a second, to heat a magnesium oxide sample to temperatures as high as 90,000 degrees Fahrenheit (50,000 Celsius), also squeezing it in the process to pressures 14 million times that of normal Earth atmospheric pressure.   They watched this rocky substance change to a solid with a new crystal structure, and finally into a liquid metal. In the melting process, the material changes its properties radically, going from an electrical insulator into a material that allows electrons to flow easily through it, allowing a magnetic field to form.

“Our results show that the usual assumption that planetary magnetic fields originate exclusively in iron cores is too limiting,” McWilliams said. “Magnetic fields might also form within planetary mantles. In fact, this idea has been speculated on for decades, but now we have hard data to show that, indeed, such a ‘mantle-dynamo’ is plausible.”

Previous theories regarding magnesium oxide said that the material may exist in only three states with different structures and properties present under planetary conditions –  solid under ambient conditions (such as on the Earth’s surface), liquid at high temperatures, and another form of solid at high pressure . This last structure had never been observed until now.

The implications of these findings suggest that the metallic, liquid phase of magnesium oxide could well exist today in the deep mantles of super-Earth planets, as well as the newly-observed solid phase. This means that they might very well harbor a magnetic field which might protect its surface from radiation and allow life to blossom.

“It is often said that life on planets may require the presence of a strong magnetic field to protect organisms from dangerous radiation from space such as cosmic rays — at least this may be true for certain types of life, similar to humans, that live on a planet’s surface,” McWilliams said. “We find that magnetic fields may occur on a wider range of planets than previously thought, possibly creating unexpected environments for life in the universe.”

“Everyone, both scientists and the public, should keep in mind that super-Earths are, and probably will remain for some time, a big mystery,” McWilliams said. “It is easy to speculate as to their properties — to draw a picture of one, for example — but quite difficult to make certain conclusions such as we have for our own Earth. This is both exciting and daunting — there are many possibilities to explore, but scientists have much work to do. We hope the public has a lot of patience.”

Findings were reported in the journal Science.