by Tibi Puiu
in Science, Space
Reading Time: 4 mins read
A A
Share on FacebookShare on TwitterSubmit to Reddit

In our very own Milky Way galaxy alone,  astronomers estimate there are between 200 billion and 400 billion stars. Of these, there are many that exoplanets within their solar systems. Still, what are the odds planets, more or less similar to our one, capable of supporting life, microscopic or otherwise, exist? This is the exact role of the Kepler mission, that keeps a watchful eyes for any sign of such exoplanets as it scours the sky. So far, scientists have found around 2000 exoplanets, and the numbers are ever increasing. The idea that the perfect life sustaining conditions on Earth represent a singular event in the cosmos or, even more irrationally, a simple fluke of physics seems to steadily become obsolete.

Exoplanets come in four types. Gaseous giants, like Jupiter or Saturn, comprised mostly of hydrogen and helium, with absolutely no chance of supporting life. Ice giants, like Neptune or Uranus, which besides hydrogen and helium, also contain substantial amounts of methane, water, and ammonia ices  in their atmosphere – these kinds of planets however are too cold and liquid water for life to exist. Hot-super Earths, these planets are generally bigger or similar in size to Earth, and are comprised of rock or gas, however being in a close proximity to the sun, they’re too hot to support life. 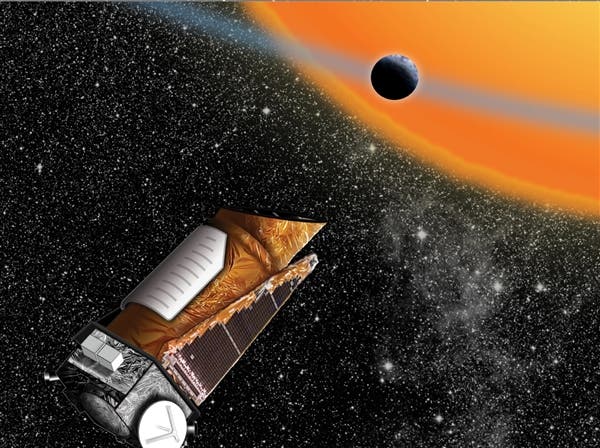 The forth type of exoplanets is what Kepler’s agenda is all about. What made Earth the safe haven it is today – a paradise for life? Well, Earth is considered to revolve under the perfect life sustaining orbit around the sun, not too cold, not too hot. Also, equally important, the Earth has a electromagnetic shield which protects it from death sentencing solar radiation.  In short Earth is located in the habitable zone, or “goldilocks” zone as it’s affectionately been dubbed by scientists, of our solar system – this is the target zone for the Kepler as well.

So far, Kepler has identified over 2000 exoplanets, of which a quite a few have been placed in the habitable zone. The most promising find was Kepler 22-b, however after a closer look, scientists claimed that chances for supporting life are rather dim. Also, last September Kepler identified the first planet orbiting around two suns, reminiscent of Star Wars’ Tatooine, called Kepler-16b.

Alright, but if we can’t see other planets directly with telescopes, how does one spot these exoplanets, you say? When a planet orbits around its sun incident to Kepler’s direction of observation, it changes the flux of emitted light, just like you’d have an object moving around a circular rail pass in front of a stationary flashlight. Remarkably, by determining how long the planet takes to transit the star, an approximate orbital size and mass can be calculated using Kepler’s Third Law of planetary motion. Furthermore, from the orbital size and temperature of the star, the planet’s characteristic temperature can be calculated.

“To define the habitable zone we calculate the amount of flux that is incident on an object at a given distance,” Billy Quarles explained in an interview for physorg.org. “We also took into account that different planets with different atmospheres will retain heat differently. A planet with a really weak greenhouse effect can be closer in to the stars. For a planet with a much stronger greenhouse effect, the habitable zone will be further out.”

One thing is clear, out of the vast myriad of exoplanets in our galaxy alone, statistically speaking there’s a huge number of goldilocks exoplanets. Out of these goldilocks exoplanets, finding the next Earth might only be a matter of time. Moreover, scientists believe it is very likely there are goldilokcs moons as well, which also might support life. Right now, funding for the $600 million Kepler mission is due to run out in November. Scientists are confident that by then they can gather enough data to find suitable exoplanets capable of supporting life, if anything, the will keep the very busy for years, however and extension of the survey would surely give them more confidence.