How Gold is made and how it got to our planet

From ancient civilizations to modern day, the allure of gold has never waned. But where does this precious metal actually come from?

Revered for its aesthetic and metallurgical properties for thousands of years, gold is still one of the most sought-after precious metals. There’s no question about it — for better or for worse, gold has played a unique role in human history. But where does gold come from? Your first thought might be to answer some underground mine or fast-flowing stream littered with flakes of gold, but the true origin of gold is much more spectacular, predating the existence of our planet by billions of years.

You see, the origin of gold is a journey that begins in the stars.

Today, we’ll explore the fascinating science behind the origin of gold atoms and see how the prized element got to where it is today, here on Earth.

Where did gold come from?

The ancient Aztecs believed gold was in fact “the sweat of the sun”. Although this is just a legend, the phrase is a surprisingly accurate metaphor.

The heavy elements that make up the Earth, including gold, were formed in the hearts of stars. Through nuclear fusion, the elements were fused together under intense heat and pressure. But, the creation of very heavy elements such as gold requires an even more extreme event: the explosion of a supernova.

In the beginning, following the Big Bang, only two elements were formed: hydrogen and helium. A few hundred million years after the Big Bang, the first stars were blazing away with their nuclear fires. These nuclear fires fused lighter elements together to make slightly heavier elements, and these nuclear reactions released a huge amount of energy.

Gradually, these early stars began making increasingly heavier elements such as carbon, nitrogen, and oxygen — working their way up through the periodic table towards iron. But there was still no gold in the Universe. Once these earlier stars ran out of light elements to burn, they kicked in on the heavier ones. However, very heavy elements like gold weren’t made through nuclear fusion.

As some massive stars reached the end of their life cycle burning silicon to make iron, they exploded as a supernova, and for a few short moments, these dying stars would release as much energy as all the regular stars in that galaxy put together. This collapse triggers a massive release of energy that propels the outer layers of the star into space at tremendous speeds. As these layers cool and expand, they form clouds of gas and dust known as nebulae, which then go on to form new stars and planets.

It is within these nebulae that the elements, including gold, are forged through a process called neutron capture. As the cloud of gas and dust cools, the protons and neutrons within it begin to combine to form heavier elements. In some cases, a neutron may be captured by the nucleus of a lighter element, turning it into a heavier one. This process can occur multiple times, eventually forming elements as heavy as gold, which are then hurled out into the Universe, along with the other debris from that explosion.

It is estimated that the amount of gold present in the entire universe is about 50 billion tons, with about one ounce for every 150 billion tons of Earth.

On Earth, gold finally reached us some 200 million years after the formation of the planet when meteorites packed with gold and other metals bombarded its surface, eventually becoming incorporated into the planet’s crust.

But that’s not the only way gold made its way to Earth’s surface. During the formation of Earth, molten iron sank to its center to make the core. This took with it the vast majority of the planet’s precious metals — such as gold and platinum. In fact, there are enough precious metals like gold in the planet’s core to cover the entire surface of Earth with a four-meter thick layer.

As molten rock, or magma, rises to the surface, it can pick up and concentrate elements such as gold. When the magma cools and solidifies, it forms rock such as granite, and sometimes gold can be found in the veins of this rock.

Another theory concerning the formation of gold that’s been gaining a lot of traction today is that the element can form following the collision of two neutron stars. When a massive star that is at least eight times more massive than the Sun collapses, it will leave behind an extremely dense core. This core will have a mass comparable to a star compressed into an object roughly 10 kilometers in diameter, or the size of a city on Earth. Another way to look at this would be to imagine cramming Mount Everest into your morning cup of coffee. At these huge densities, the fabric of space and time is stretched by exotic physics.

Two neutron stars in mutual orbit can collide when gravitational waves carry enough energy away from the system to destabilize the orbit. When this happens, a type of gamma-ray burst can occur – these are the most powerful explosions in the universe. The intense energy would be enough to create gold and other heavy elements, according to a paper published in the Astrophysical Journal Letters

Check out the video below for a brief explanation of the neutron star gold formation hypothesis. 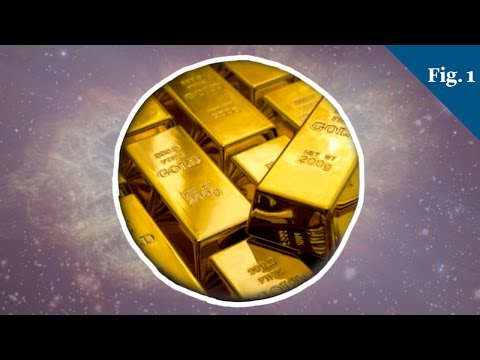 Why gold is important

From Copper Age Israeli hills to the Bulgarian Varna Necropolis in the 4th millennium B.C. and from the Egyptian pharaohs to the Spanish conquistadors, the allure of gold – its powerful effect on us – has been consistent and unmistakable. In fact, the Egyptians called gold “the breath of God”. And it’s not just the ancients that held gold in high esteem.

To display his imperial glory, Napoleon gilded Paris in gold, while even more recently Hitler sought to control all of Europe’s gold as support for his “1000-year Reich.” What features have made gold such a prized commodity and what appealing physical properties still support it as a precious metal to this very day?

First and foremost, what makes a metal precious is its scarcity.  Rarer than silver or copper, two other metals mined since antiquity, the value of gold is proportionately larger. Second, gold has some fantastic physical properties. It does not tarnish, it’s very easy to work, can be drawn into wire, hammered into thin sheets, it alloys with many other metals, can be melted and cast into highly detailed shapes, and has a wonderful color and a brilliant luster. All of these properties could be harnessed since ancient times, like today, just by heating gold nuggets at high temperatures and using simple tools like hammers or molds.

Gold can also be highly visually appealing, so it shouldn’t come as a surprise that one of its main use is in jewelry. Since time immemorial the noble metal’s resplendent luster has made its way into the world’s most coveted and exquisite jewelry — fit for queens or kings. Today, most of the gold that is newly mined or recycled is used in the manufacturing of jewelry. About 78% of the gold that’s available, as opposed to stored, each year is used for this purpose.

Because gold is highly valued and in very limited supply it has long been used as a medium of exchange or money. The first known use of gold in monetary transactions dates back over 6,000 years. The first gold coins were minted under the order of King Croesus of Lydia (a region of present-day Turkey) in about 560 BC. Gold coins were commonly used in transactions up through the early 1900s when paper currency became the norm. The United States once used a “gold standard” and maintained a stockpile of gold to back every dollar in circulation. Under this gold standard, any person could present paper currency to the government and demand in exchange an equal value of gold.

However, what’s arguably gold’s greatest value proposition to mankind didn’t become evident until the early last century when its fantastic electrical conductivity properties came to light. Solid-state electronic devices use very low voltages and currents which are easily interrupted by corrosion or tarnish at the contact points. Gold is a highly efficient conductor that can carry these tiny currents and remain free of corrosion, which is why electronics made using gold are highly reliable. A small amount of gold is used in almost every sophisticated electronic device. This includes cell phones, calculators, personal digital assistants, global positioning system units, and other small electronic devices.

As human civilizations evolved, so did the methods for mining gold. The Romans developed the first large-scale mining operations, using water-powered machinery to mine gold from riverbeds. The California Gold Rush of 1849 saw a mass migration of people to the western United States in search of gold. And in the modern era, the use of technology such as deep drilling and cyanide leaching has allowed for the extraction of gold from even more challenging deposits.

However, the quest for gold is not without its challenges. The extraction of gold is often associated with environmental degradation, including the destruction of habitats and the displacement of local communities.

Gold, the most sought-after metal on Earth, has a fascinating origin story that begins in the stars and is reflected in every bit of shiny jewelry or coins. From its formation through nuclear fusion and neutron capture in supernovae, to its journey to Earth through meteorites and volcanic activity, gold has played a significant role in the formation and evolution of our planet. And the quest for gold continues, driving human innovation and exploration, but also posing environmental and safety challenges.