Thousands of rubber ducks were brought to the test.

Drones aren’t just for recreational use—they are becoming increasingly used for monitoring wildlife. However, researchers didn’t know just how accurate they are compared to traditional counting. Cue a few thousand rubber ducks and the birth of the #EpicDuckChallenge. The outcome showed that using drones is more accurate than counting from the ground.

“For a few years now, drones have been used to monitor different animals that can be seen from above, including elephants, seals and nesting birds. But, until now, the accuracy of using drones to count wildlife was unclear,” says the study’s lead author, Jarrod Hodgson from the University of Adelaide’s Environment Institute and School of Biological Sciences.

The researchers wanted to compare how accurate drones are compared with counting.

“We needed to test the technology where we knew the correct answer. We couldn’t use wild animals because we could never be sure of the real number of individuals present,” said Hodgson.

Therefore the researchers turned to “sitting ducks”. They had known numbers of rubber greater crested terns (Thalasseus bergii) that were laid out on a beach in fake breeding colonies of 463-1,017 individuals. Experienced wildlife spotters counted the birds from the ground with binoculars or telescopes while the drone took photos from the sky.

Citizen scientists were also in on the game. They were able to count the number of birds in the drone photos. However, they weren’t the only ones counting. The researchers also created a computer algorithm that could distinguish the birds from the background and “count” the number of birds. It was as accurate as the people counting. It can be used when there are thousands of animals to be counted to streamline the detection process. 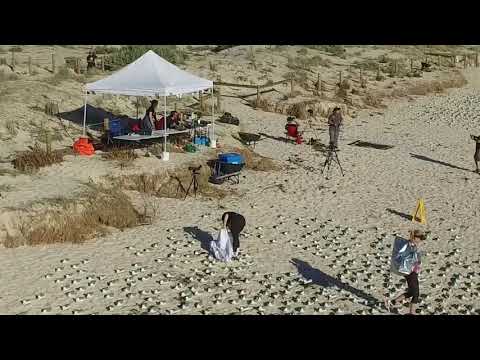 In the end, the drones were more accurate than counters on the ground by between 43 and 96%. It is not surprising since it is much easier to tell apart objects when they are spread apart on a flat plane rather than overlapping like they would be at eye level. It is good news that there is a way to get a more accurate view of the number of animals in an area. It is critical to know how well a species is doing and to use that information to make conservation decisions.

“With so many animals across the world facing extinction, our need for accurate wildlife data has never been greater,” Mr Hodgson says. “Accurate monitoring can detect small changes in animal numbers. That is important because if we had to wait for a big shift in those numbers to notice the decline, it might be too late to conserve a threatened species.”