Dark matter is a type of matter which astrophysicists believe covers the greater part of the Universe’s mass. However, dark matter can’t be seen, nor does it interract with any type of electromagnetic radiation – it is only observed through the gravitational object it has on other bodies. Dark matter is estimated to constitute 84% of the matter in the universe and 23% of the mass-energy. Now, astrophysicists have mapped the first 3D image of a gigantic dark matter filament. 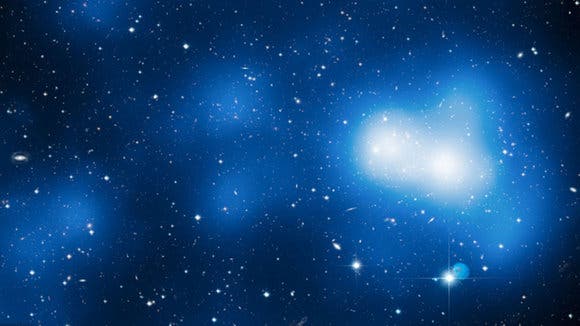 By studying and collating images from the Hubble Space Telescope, researchers were able to get a pretty accurate picture of dark matter (shown in blue in the above picture) – extending some 60 million light years away from a massive galactic cluster called MACS J0717.

Current theories suggest than then the Big Bang took placedense matter condensed into a web of tangled dark matter filaments throughout the universe, a process they’ve mapped in computer simulations. It is believed that dark matter is structured like a angled web, with long strings of mostly dark matter intersecting at giant galaxy clusters. But identifying these filaments in outer space – that’s an entirely different thing.

“Filaments of the cosmic web are hugely extended and very diffuse, which makes them extremely difficult to detect, let alone study in 3D,” said the study’s lead author, Mathilde Jauzac of LAM in France and University of KwaZulu-Natal in South Africa.

The cluster itself was important for the study.

“From our earlier work on MACS J0717, we knew that this cluster is actively growing, and thus a prime target for a detailed study of the cosmic web,” study researcher Harald Ebeling, of the University of Hawaii at Manoa, said in a statement Tuesday (Oct. 16).

The length of the filament (60 million light years) is absolutely huge, and the fact that researchers were able to map it 3D makes the achievement even more significant. Also, if this string is representative for others in terms of size, then these strings might contain even more dark matter than theorists had predicted.

The study will be published in the Nov. 1 issue of Monthly Notices of the Royal Astronomical Society.