If you want to lose a few extra pounds though, there are some better ways.

by Mihai Andrei
in Health & Medicine, Science
A A

Technology made its way to the world of chess, and it’s confirming something that we were hoping for a long time: thinking hard really does burn a lot of calories. 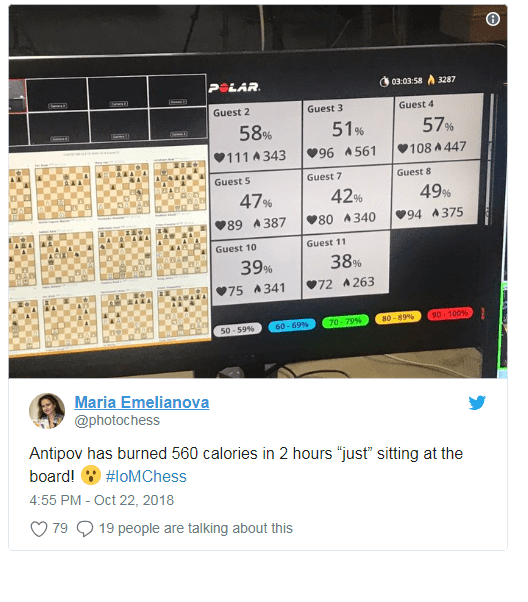 The Isle of Man is currently hosting the biggest open chess tournament of the year, attended by some of the world’s greatest players as well as young, up-and-coming prodigies. The tournament has already produced some spectacular games and remarkable upsets (no spoilers), but one of the most interesting things to come out of the tournament is not chess-related at all.

In the tournament, organizers asked some of the players to wear heart and calorie monitors. The players can, of course, decline (some feel that they could give away significant information by revealing their heart rates during a game), but most accepted — and the data looks quite interesting.

For instance, Grandmaster Mikhail Antipov burned 560 calories during two hours of play — the equivalent of running around 8 km (5 miles) or swimming for one hour. Full disclosure: the number of calories you burn in different activities depends on your own physique and although Antipov’s height and weight are not public, he seems to have a fairly normal distribution, so we’ll go with that.

We burn calories all the time, just by breathing, but Antipov’s rate is truly remarkable. It’s like he’s having a brisk walk, or even a light swim, for the duration of the game — but he’s sitting down. As the event’s photographer FM Maria Emelianovva noted, the stress of chess was making Russian GM Mikhail Antipov‘s heart pump, which made him consume more calories — a higher heart rate requires more breathing, which increases the number of calories you burn.

So is chess a sport?

If you ask the International Olympic Committee and many countries, the answer is ‘yes’ — though not because of burning calories. But in the UK, for instance, it’s not, as authorities state that it doesn’t have a physical component. Some have expressed hope that the heart monitors could be used to justify re-classification, though that’s mere speculation at this point.

There’s no denying that chess is good for the mind, and as it turns out, it can also burn quite a few calories — but if you want to lose some extra pounds, you’re probably better off simply sticking to a healthier diet and working out once in a while.

Antipov’s opponent, Super GM Hikaru Nakamura, also agreed to wear a heart monitor, and at one point, his heart rate jumped to a remarkable 130 beats/minute. Ultimately, their game ended up in a draw.