Synthetic ‘living crystals’ might offer insights into origin of life

by Tibi Puiu
in Chemistry, Science
Reading Time: 3 mins read
A A

Scientists at  New York University have created a type of synthetic particles that can bind and assemble into clusters, similar to how flocks of birds or schools of fish organize themselves in complicated patterns. Self-assembling materials are far from being new, but what distinguishes this new research is that the particles eventually organize themselves in what the authors call “living crystals”. 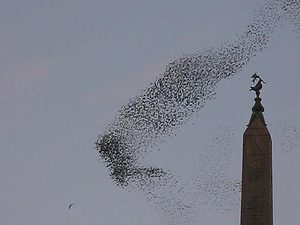 For their research, the scientists wanted to maybe find what the underlying physical principle behind self-organizing collective behaviors. By building their own synthetic particles that join together in complicated collective behavior, all from the simple properties of each individual particle, the scientists managed to build an interesting non-equillibrium model to study; one that isn’t subjected to external factors – like social behavior in the case of flocks of birds. What’s interesting is that the particles the New York University researchers built form a “living crystal” that moves, swirls, and adjusts to heal cracks.

“There is a blurry frontier between active and alive,” said biophysicist Jérémie Palacci of New York University. “That is exactly the kind of question that such works raise.”

Each particle is made  from a microscopic cube of hematite, a compound consisting of iron and oxygen, sheathed in a spherical polymer coat. One corner is left exposed. When such a particle is exposed to blue light, this certain wavelength causes hydrogen peroxide to decompose on the exposed portion of the metallic cubes. As the hydrogen peroxide breaks down, concentration gradients form, which guide particles to travel along these gradient lines. Eventually, the particles aggregate into crystals.

Can you synthesize life?

These crystals rotate, crack, and reorganize to heal defects – like a sort of living crystal; something that struck scientists rather profoundly. The process only stops once the blue light is turned off.

“Here we show that with a simple, synthetic active system, we can reproduce some features of living systems,” Palacci said. “I do not think this makes our systems alive, but it stresses the fact that the limit between the two is somewhat arbitrary.”

Typically scientists today define life has having metabolism, mobility, and the ability to self-replicate. All are in check besides self-replication, but one can only wonder – when life first sparked on our planet, wasn’t it actually the product of millions of years of micro-assemblies and out of equilibrium physical processes?

We’re still far away from being able to answer such a question, in the meantime however Palacci and colleagues are busy replicating their findings with an induced magnetic field. Another interesting lab  particle currently under development isn’t mobile, but it has a metabolism and is self-replicating. How long before all three come together?

Findings were published in the journal Science.