The Pharaoh’s Snake: This Chemical Reaction looks like a Portal to Hell

Many chemical reactions are quite shocking, but this one is definitely something else. Take a look at the decomposition of Mercury(II) thiocyanate (Hg(SCN)2):

Mercury thiocyanate is a white powder that looks pretty inconspicuous when you look at it. However, when you introduce heat (burn it), it produces a blue flame and creates a solid snake-like mass which seems to stem straight from hell. The reaction is a trumped up version of the one seen in “black snake” fireworks, which generally use baking soda, linseed oil, and hydrocarbons. 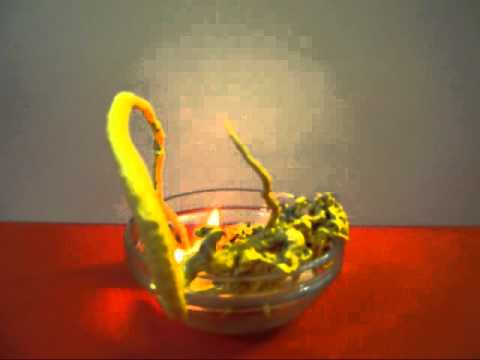 Mercury thiocyanate was formerly used in pyrotechnics causing an effect known as the Pharaoh’s serpent or Pharaoh’s snake. However, use of the substance has been recently banned as the reaction was toxic.