by Mihai Andrei
in Biology, Chemistry, News
A A

“Their defensive mechanism is highly effective,” Arndt says, making bombardier beetles “invulnerable to most vertebrates, and invertebrates”—except for a few very specialized predators that have developed countermeasures against the noxious spray.

It’s a pretty good life if you’re a bombardier beetle – you have almost no natural predators, you can survive on every continent except for Antarctica and if someone annoys you, you can just send a foul jet at them with remarkable precision. The liquid these beetles eject is called benzoquinone, and is actually a fairly common defensive agent among insects, Arndt says. But what makes bombardier beetles so special is that they can superheat it first, and then send it out in a pulsating jet. What’s more, they can aim it precisely well. The new, multidisciplinary study wanted to find out how they can do this.

“Understanding how these beetles produce – and survive – repetitive explosions could provide new design principles for technologies such as blast mitigation and propulsion,” said Wendy Moore, one of the lead authors of the study, from the University of Arizona.

The key is that they synthesize the chemical at the moment they want to use it, mixing two chemical precursors in a protective chamber in their hindquarters. As the two chemicals combine, they give out a lot of heat, which is absorbed by the jet. The process also generates the pressure needed to eject it, in a series of pulses.

“Twenty-five years ago, a team of scientists from Cornell University and MIT discovered that each blast from the bombardier beetle is actually a series of extraordinarily fast micro-pulses,” Moore said. 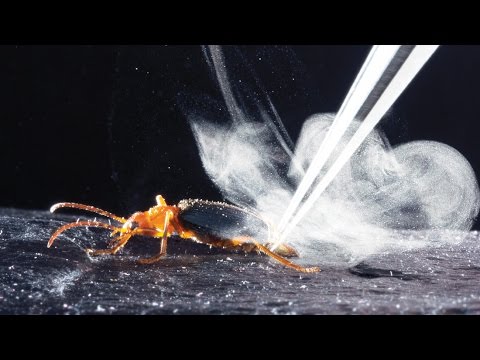 The new study found, which took X-Ray images of the beetles’ abdomens, revealed that the chemical is formed through a passive process, and not active muscle contraction, as was previously believed.

“By having a pulsed delivery, these small beetles produce a relatively large amount of defensive spray, which they can aim precisely and with great force and speed,” Moore said. “This is truly one of the most remarkable and elegant defensive mechanisms documented to date,” she added.

Understanding the beetles’ ability to create these violent processes and survive them is not only interesting in itself, but may lead to the design of new blast-protection systems; this study shows how the sophisticated and specialized biological design of the system works to simultaneously achieve defensive and protective functions. It’s also, as the researchers point out, one of the most elegant mechanisms in the natural world.