by Tibi Puiu
in Science, Technology
Reading Time: 3 mins read
A A

A common SciFi theme we often see in movies is that of extravagant covert ops equipment, like a device which can see through a building and see whatever the enemy is doing inside, eventually convenianetly imagined like ambulant skeletons running around with machine guns. Researchers from MIT have managed to bring such a device to the real world, after they successfully tested a concrete wall penetrating radar that can render a real-time video of what’s going on inside, albeit not at the level of sophistication you see in movies.

Special radars which can see through walls have been developed before, but they’ve only been effective at offering a static glimpse, the new device however offers video imaging at 10.8 frames per second.

The main challenge researchers faced in their project was signal processing. Just like we see after visible light bounces off an object and hits the retina, so do radars by bouncing radio waves to the receiver. In the same manner, however, just how light can’t penetrate walls in quantaties large enough to be visible to the human eye, so can’t radio waves either.

For it to work, you need a complex array of signal amplifiers, since by the time the radio wave bounces off the wall the signal is reduced to about 0.0025 percent of its original strength. If that wasn’t enough, for the device to be suitable for military applications, it’s main purpose and source of funding, it had to achieve the speed, resolution and range necessary to be useful in real time.

“If you’re in a high-risk combat situation, you don’t want one image every 20 minutes, and you don’t want to have to stand right next to a potentially dangerous building,” says project leader Gregory Charvat.

You can achieve a greater signal fidelity by employing long wave radio transmitter/receivers, however you’d end up with a device the size of a house. The researchers eventually settled for S-band waves, the same fairly short wavelength as wireless internet, employed by a device consisting of an array of antennas arranged into two rows — eight receiving elements on top, 13 transmitting ones below — and some computing equipment, all mounted onto a conveniently sized movable cart. The Lincoln Lab team’s system may be used at a range of up to 60 feet away from the wall.

A device that can see through walls

To get around the various perturbations radio waves encounter on their way back, the Lincoln Lab researchers employed a special analog crystal filter, which exploits frequency differences between the modulated waves bouncing off the wall and those coming from the target, enabling the wall to be simply filtered out.

“It’s a very capable system mainly because of its real-time imaging capability,” says Robert Burkholder, a research professor in Ohio State University’s Department of Electrical and Computer Engineering who was not involved with this work. “It also gives very good resolution, due to digital processing and advanced algorithms for image processing. It’s a little bit large and bulky for someone to take out in the field,” he says, but agrees that mounting it on a truck would be appropriate and useful.

The real-time imaging is ensured by a potent processor which uses a subtraction method, comparing each new picture to the last, and seeing what’s changed. Thus, the radar can only detect moving targets – static objects like furniture and the likes will not be imagined, but even a sitting human has a perceivable movement and thus can be imaged.

Like I said, the system isn’t sophisticated enough, and targets show up as moving “blobs” from a bird’s eye perspective, but it still looks effective enough to be deployed. Future versions will convert a blob into a clean symbol to make the system more end-user friendly. “To understand the blobs requires a lot of extra training,” Charvat says. Check out the demo video of the device below. 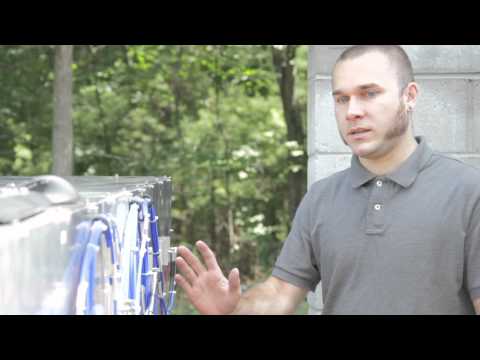