by Mihai Andrei
in Biology, Chemistry
A A

Researchers have found that methane-decomposing bacteria from hot springs need rare earths to produce the energy they need to survive. 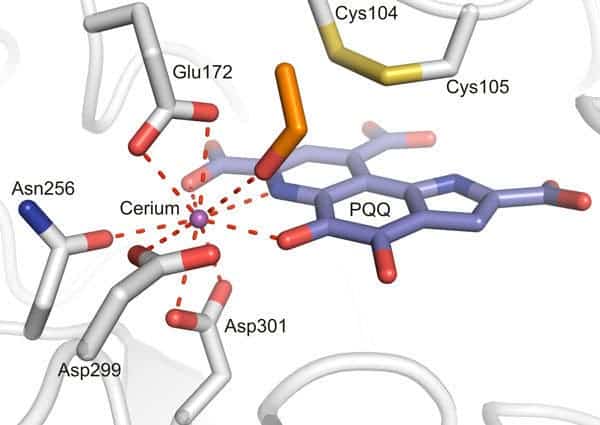 Rare Earth Elemenets (REE), or rare earth metals as they are sometimes called are a group of 17 chemical elements in the periodic table, specifically the so-called lanthanides plus scandium and yttrium. They are among the most valuable chemical elements, as they are used in a myriad of applications, including in mobile telephones, display screens and computers and photovoltaic panels – they are indispensible to many organisms as well. A team of researchers has now discovered a bacteria which relies on rare earths to grow – in a hot spring. The fact that Methylacidiphilum fumariolicum requires rare metals such as lanthanum, cerium, praseodymium or neodymium to grow seems to suggest that the use of rare earths is possibly more widespread among bacteria than previously thought.

The 17 elements are not in fact as rare as you might think – they’re way more widespread than gold or platinum for example; the main problem lies within their relatively even distribution across all the crust, which makes mining economically viable only in a few places (most of which are in China).

However, in living organisms, rare earths are in fact rare. It takes a whole lot for them to dissolve in water so they don’t really go well with metabolic transformations. So when scientists from the Max Planck institute found them in a mudpot of volcanic origin in the Solfatara crater in Italy they were pretty surprised. After further research however, they found a microbe which not only tolerates rare earths, but absolutely needs them to thrive.

Methylacidiphilum fumariolicum belongs to a group of bacteria which live in extreme environments: temperatures of 50-60 degrees Celsius and pH of 2-4, sometimes even as low as 1, which is basically more acidic then sulphuric acid. These microbes take their energy requirements from methane – but they used a rather strange process to do it, using special enzyme, methanol dehydrogenase, which processes the methanol produced by methane decomposing – and that’s where the rare earths fit in.

“Suddenly, everything fit together,” explains Thomas Barends. “We were able to show that this mysterious atom must be a rare earth. This is the first time ever that rare earths have been found to have such a biological function.” Methylacidiphilum uses the rare earths lanthanum, cerium, praseodymium and neodymium in its methanol dehydrogenase instead of calcium. The bacterium needs them to produce energy from methane.

It’s not yet clear if this could provide an economic advantage in mining rare earths.