by Mihai Andrei
in Biology, Chemistry, Research
A A 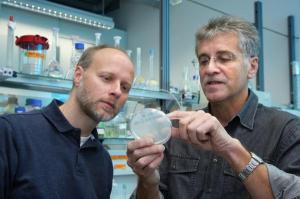 Polymethyl methacrylate (PMMA for short) is a thermoplastic and transparent plastic that’s called acrylic glass for short. In the not so distant future it could be made from natural products such as sugars, alcohols or fatty acids. This process is much more environmentally friendly than the process used now.

PMMA is manufactured by polymerising methyl methacrylate (MMA). However, scientists at the University of Duisburg-Essen and the Helmholtz Centre for Environmental Research (UFZ) a bacterial strain that produces an enzyme which could be used for the biotechnical process of producing MMA, or at least a precursor of it.

Going a bit into technicalities, this enzyme makes it possible to turn a (linear) C4 carbon structure into a branched one (where a substituent is replaced by a covalently bonded chain of that polymer). This types of compounds are the precursors of MMA.

The chemical industry worldwide has been searching for a better way of producing them for quite a while now, so this development could have a significant impact, as this type of mutase (in which an enzyme “jumps” from a functional group from one position to another to create of molecule) solves many of those problems.