Worms are definitely a tough bunch; you may see them as soft and vulnerable, but they can resist in conditions that would make even Les Stroud go ‘wow’. For example, a new study concludes that worms can live in up to 0.8 miles (1.3 kilometers) down.

The worms from hell 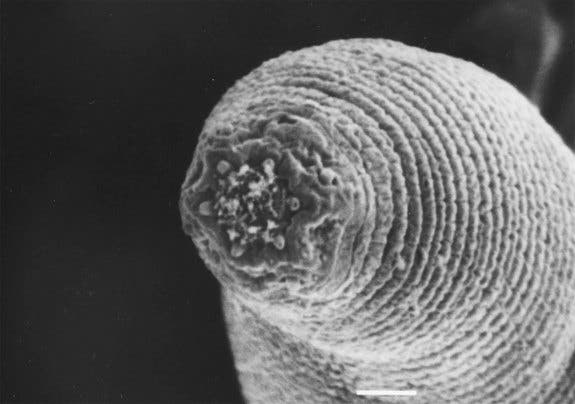 They have been rightfully named Halicephalobus mephisto in honor of Faust’s demon Mephistopheles – again scientists are finding some amazingly cool names. These worms are not only the record setters for worms, but they are the multicellular organisms living at the biggest depths.

“We tried to get the title of the paper to be ‘Worms from Hell,'” said study author Tullis Onstott of Princeton University. “But Nature didn’t go for that.”

The team has been studying underground life for more than 15 years, focusing on the super deep mines in South Africa which go up to 3 kilometers in the bowels of the Earth. They had some quite interesting results, especially extremophile bacteria; but finding a 0.5 millimeters worm living in tiny holes and cracks – that’s a whole new different story. The worm lives in fluid filled holes, where it feasts of any bacteria that happens to be nearby.

“It’s kind of like finding Moby Dick in Lake Ontario,” he said. “It’s so volumetrically big. It’s 10 billion times the size of the bacteria upon which it feeds.”

In order to find the worm, the team studied water from mine boreholes that go up to 3.5 km deep. They also sampled about 40,000 gallons of surface water just to be sure that the worms (or nematods) weren’t coming from the surface.

Researchers were able to capture the species and make it reproduce in the lab, where it is still “squirming around”. The researchers also performed chemical analysis on the water, and found that it is at least 2900 years old, which means that the worms have been hanging around there for quite a while.

The team also tried to feed the worms some other bacteria, like E. Coli, but they found that the worms would much rather have bacteria from deep fissures, turning up its wormy nose.

The finding encourages the search for life in some very different and extreme conditions; researchers assumed that any life they might find underground on Mars will be unicelullar, but this changes things quite a lot.

“This kinds of opens it up to, well, even multicellular life could be possible,” Meyer said.