Scientists show how plants communicate — and it looks amazing

I could watch these videos all day.

by Mihai Andrei
in Biology, Chemistry, News, Science
A A
Share on FacebookShare on TwitterSubmit to Reddit

For a while now, researchers have been observing an intriguing phenomenon: when one part of a plant is under attack (say, by a hungry caterpillar), the defense systems are activated in other parts of the plant. But how do they know to do so? A new study sheds new light on that process, highlighting the impressive means through which plants communicate — and they have the amazing videos to go with it.

Plants don’t have nerves, but, as it turns out, they have something that’s surprisingly similar: a network of signaling cues, the same cues that many animals use in their own nervous systems.

“We know there’s this systemic signaling system, and if you wound in one place the rest of the plant triggers its defense responses. But we didn’t know what was behind this system,” explained botanist Simon Gilroy from the University of Wisconsin-Madison.

Gilroy and botanist Masatsugu Toyota, a former postdoc in Gilroy’s lab, wanted to see how this signal propagates.

“We do know that if you wound a leaf, you get an electrical charge, and you get a propagation that moves across the plant,” Gilroy adds. What triggered that electric charge, and how it moved throughout the plant, were unknown. But there was one likely culprit: calcium. 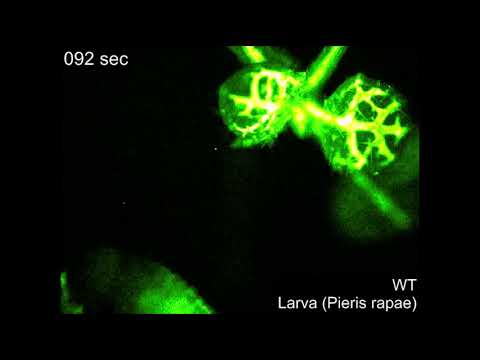 Calcium is found almost everywhere in cells, often acting in a sensor-like fashion. Because it carries an electrical charge, it can produce a signal about a changing environment. But the problem is that calcium is very difficult to study, spiking and dipping quickly, and researchers needed a way to study it in real time.

So they genetically engineered a mustard plant that would reveal changes in calcium concentration in real-time. The thus-developed plants produce a protein that fluoresces around calcium — basically, whenever there’s a spike in calcium, the plant lights up. They found that this allowed them to see the signaling process, which propagates at a speed of about 1 millimeter per second — lightning fast in the plant world, but still only a fraction of what we see in the animal world.

Toyota and Gilroy showed that when the plant is threatened (most commonly by insects) waves of calcium flow from the source of the attack throughout the plant. As soon as the defensive wave hits, defensive hormones are released in the plant in an attempt to stop the damage from taking place. These noxious hormones deter some of the plants’ predators from eating them.

The team also wanted to see what triggers this calcium release in the first place. Previous research had suggested that glutamate, an amino acid and significant neurotransmitter in both plants and animals, is the key. So they used mutant plants lacking glutamate receptors and found that the flow of calcium was also disrupted.

So essentially, when the plant is bitten or attacked, it spills out glutamate from the wound site. From there, this triggers a wave of calcium flowing through the plant, which leads to activation of the plant’s hormonal defense mechanisms. It’s a remarkably complex and dynamic process, for a group of organisms which are often regarded as inert and lacking a nervous system.

In addition to the describing this process, the study videos can also help scientists visualize this astonishing mechanism — and let’s admit it, it’s also really nice to look at.

“Without the imaging and seeing it all play out in front of you, it never really got driven home — man, this stuff is fast!” he says.

The study has been published in the journal Science.