It's just what the early humans were doing.

by Mihai Andrei
in Biology, News
Reading Time: 4 mins read
A A
Share on FacebookShare on TwitterSubmit to Reddit 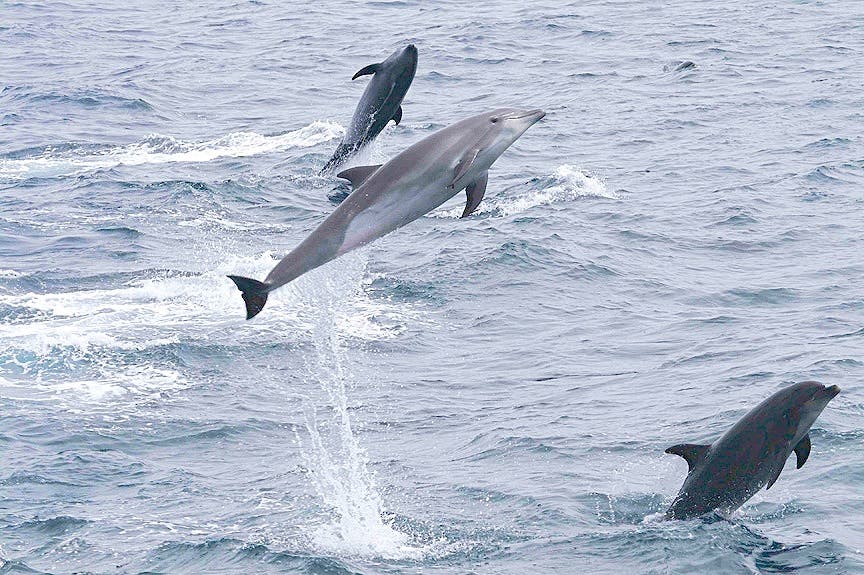 It’s already well known that male dolphins often form alliances with each other — sometimes lasting for a few decades. Now, researchers have found that dolphins use individual vocalizations to refer to each other. In other words, they have names.

“We found that male bottlenose dolphins that form long-term cooperative partnerships or alliances with one another retain individual vocal labels, or ‘names,’ which allows them to recognize many different friends and rivals in their social network,” says Stephanie King from the University of Western Australia. “Our work shows that these ‘names’ help males keep track of their many different relationships: who are their friends, who are their friend’s friends, and who are their competitors.”

King and her colleagues wanted to figure out how the dolphins were using vocalizations to address each other, so they recorded the dolphins’ vocalizations using underwater microphones and determined the individual vocal label used by each of the males. They compared vocalizations from different alliances and found that males in an alliance retain vocal labels that are quite distinct from one another.

“All bottlenose dolphins (male and female) have their own signature whistle, which is a unique identity signal somewhat comparable to a human name,” King told ZME Science. “Animals use these signature whistles to introduce themselves to others (broadcast their identity) and can copy another dolphin’s signature whistle as a means of addressing that specific individual. However, it was previously thought that male dolphins would converge on a shared signature whistle when they formed long-term cooperative partnerships/alliances with one another. This is because across the animal kingdom it is very common for pairs or groups of animals to make their calls more similar when they share strong social bonds. This can be seen in some parrots, bats, elephants and primates, and represents a means of advertising the strength of their relationships and their group membership. It was previously thought that allied male dolphins also shared an identity signal to advertise alliance membership. While this is true for pairs of allied male dolphins in Florida, USA, we found it was not the case for the male dolphins found in Shark Bay, Western Australia, who form multi-level alliances e.g. alliances within alliances where each alliance can comprise up to 14 males.”

“With male bottlenose dolphins, it’s the opposite–each male retains a unique call, even though they develop incredibly strong bonds with one another,” King says. “Therefore, retaining individual ‘names’ is more important than sharing calls for male dolphins, allowing them to keep track of or maintain a fascinating social network of cooperative relationships.”

Interestingly, researchers also found no evidence of any genetic relatedness influencing signature whistle similarity between males. In other words, dolphins that were related didn’t necessarily have similar names. Most of the males in this study had signature whistles that were notably different from those of both first-order and second-order alliance partners.

Just like in early human populations, it seems that dolphins use individual vocal labels to maintain recognition within complex social structures. It’s not clear if this behavior is restricted only to bottlenose dolphins.

King and her colleagues now intend to study the dolphin interpersonal relationships even more closely. They want to record and then play the “names” of individual males back to the dolphin to see how different males would react to the call in different circumstances.

“It will be interesting to reveal whether all cooperative relationships within alliances are equal or not,” she says.

The bottlenose dolphin is the best-studied dolphin species, so researchers aren’t sure yet if this behavior also exists in other species — but it very well might. King explains:

“For pairs of males that form alliances in Florida, it appears they do make their identity signals more similar. Where there is only one partner, such convergence may be used to indicate commitment to one another, but we found that when multiple males form alliances between themselves and other alliances (e.g. multi-level alliances) then retaining individual names is more important than sharing calls as it allows dolphins to negotiate a complex social network of cooperative relationships. There may be other vocalisations that do not encode identity that might be favoured by particular alliances. That is something that would be worth investigating. The bottlenose dolphin is, so far, the best studied small dolphin species, but evidence suggests that other species,such as spotted dolphins and common dolphins, also have signature whistles.”