Koala’s have unique organ responsible for their low pitched voice

The pitch of male koalas’ mating calls is about 20 times lower than it should be, judging by their size and anatomical features. Now, researchers found that a unique sound producing organ, unlike anything found in other mammals, is responsible for this strange pitch. 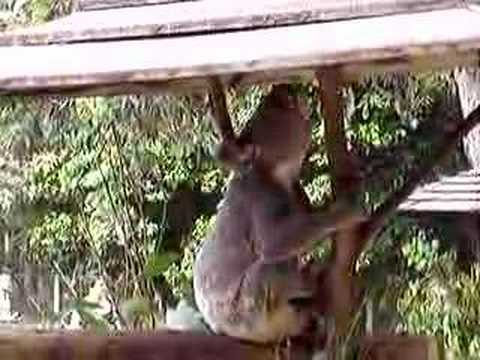 “We have discovered that koalas possess an extra pair of vocal folds that are located outside the larynx, where the oral and nasal cavities connect,” says Benjamin Charlton of the University of Sussex. “We also demonstrated that koalas use these additional vocal folds to produce their extremely low-pitched mating calls.”

It really, really sounds strange if you ask me – the sounds come out as a continuous series of sounds on inhalation and exhalation, similar to a donkey’s braying, Charlton explains; on the inhaling phase it sounds a lot like snoring, but on the exhaling phase it is reminiscent of belching. You’d expect this type of sounds from an animal about the size of an elephant, because size is related to pitch in that the dimensions of the laryngeal vocal folds generally govern the lowest frequency the animal can emit. But koalas bypassed that constraint through a never before seen mechanisms.

They relocated the vocal folds in a new location. Charlton describes the folds as two long, fleshy lips in the soft palette, just above where the oral and nasal cavities meet. They don’t necessarily look any different from the same organs in other mammals, the location is highly unusual.

“To our knowledge, the only other example of a specialized sound-producing organ in mammals that is independent of the larynx are the phonic lips that toothed whales use to generate echolocation clicks,” Charlton says.

Charlton and his colleagues were taken by surprise by this realization, and they plan to study more mammals to find out whether this vocal adaptation is truly unique to koalas.