Scientists previously misclassified a golden bat which lives in Bolivia. This new study reemphasizes the importance of museum specimens, which can be used to draw new information about species thought to be understood.

by Dragos Mitrica
Reading Time: 1 min read
A A

The bat species was known to science previously, but scientists misclassified it – so technically, it’s still a discovery. 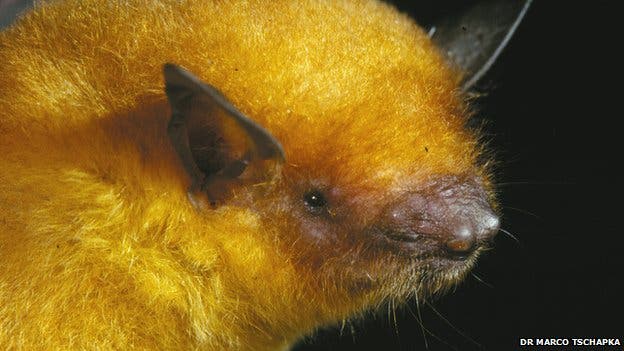 Myotis midastactus had previously been classified as another bat found in South America called Myotis simus. However, after analyzing a collection of museum specimen researchers found that it was in fact a different species, which lives only in Bolivia. The characteristic bright gold color earned it the name midasactus – after the mythological Greek king Midas, who turned to gold everything he touched.

Dr Ricardo Moratelli and Dr Don Wilson, from Fundacao Oswaldo Cruz (Oswaldo Cruz Foundation), Rio de Janeiro, Brazil and the Smithsonian Institution in Washington, US respectively conducted the study. They were unable to catch any specimens even after spending two months trying to do so. However, he was able to classify it with museum specimens, also emphasizing their importance.

“I can confidently say that many new species from different zoological groups are in museum cabinets around the world, awaiting recognition and formal description.”

He also adds that finding (or re-finding) a species is one of the most exciting things a biologist can do.

“Discovering new species is the most exciting part of my research, and in some cases describing a new species can be the first step to preserve others.”