Electric Mind Control: How the Electric Eel Dominates its Prey

The Electric Eel, a scaleless fish from the Amazon possesses an electroshock system very similar to a Taser. Not only can it stun its prey with the shock, but it can also make it twitch involuntarily, revealing its position.

The electric eel is able to generate powerful electric shocks of up to 650 volts, which it uses not only for attack and self defense, but also to communicate with others and sense the environment. Researchers have known for a while that they can also generate electricity to immobilize their prey and prevent it from escaping, but a new study conducted by researchers from Vanderbilt University finally explains exactly how this mechanism works; the research also showed that the electric eels can also remote control the minds of their prey, making them twitch and reveal their position through electric shocks. Yep that’s right – even though we’ve known about the eel for a very long time, no one really figured out how they’re able to work their electrical magic – until now.

“It’s really a beautiful piece of work,” says biologist Jason Gallant of Michigan State University in East Lansing, who studies the evolution of electric fish but was not involved in the new research. “These findings were a total surprise to me.”

Professor of Biological Sciences Kenneth Catania first noticed that the eel is very fast – being able to attack and swallow a worm or some other small prey in a tenth of a second. He quickly understood that if he wants to study their actions in detail, he will need some high-speed photography. With this set-up, he also studied their electrical abilities. 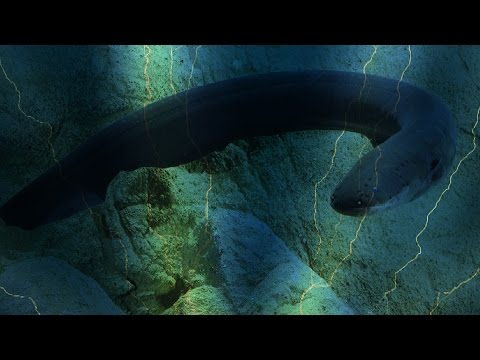 Catania recorded three different kinds of electrical discharges from the eels: low voltage discharges used for navigation and environmental sensing, short sequences of two or three high-voltage millisecond pulses (called doublets and triplets) used for hunting and lengthy high voltage, high frequency pulses used for self defense or for capturing the prey. He found that following the hunting zap, the prey is completely immobilized for a short period of time:

“It’s amazing. The eel can totally inactivate its prey in just three milliseconds. The fish are completely paralyzed,” said Catania.

Naturally, these initial observations led to other questions – and most importantly, how do they do it? Nobody actually figured out how the electric eel can stun its target.

“I have some friends in law enforcement, so I was familiar with how a Taser works,” said Catania. “And I was struck by the similarity between the eel’s volley and a Taser discharge. A Taser delivers 19 high-voltage pulses per second while the electric eel produces 400 pulses per second.”

The way the Taser works is pretty simple – it sends strong bursts of electricity to the muscles, overriding the nerves controlling the muscles and making them contract – exactly the way the eel does it. With that question answered, a single mystery remained.

The electric eel is a nocturnal animal, yet it has pretty bad eye sight; how then does it detect its prey? Catania had a pretty good hunch, and set out to test it. As it turns out, his hunch was correct – the fish sends out a very specific electric signal which produces a very rapid contraction in the muscles of its prey. This gives away the position of the prey, basically through remote control.

“Normally, you or I or any other animal can’t cause all of the muscles in our body to contract at the same time. However, that is just what the eel can cause with this signal,” Catania said.

It’s still not clear how the eel evolved this way… but this remarkable creature definitely has some unique weapons in its arsenal.

“If you take a step back and think about it, what the eel can do is extremely remarkable,” said Catania. “It can use its electrical system to take remote control of its prey’s body. If a fish is hiding nearby, the eel can force it to twitch, giving away its location, and if the eel is ready to capture a fish, it can paralyze its muscles so it can’t escape.”