Cricket virus acts like an aphrodisiac, but effectively castrates its hosts

by Mihai Andrei
in Animals, Biology
A A 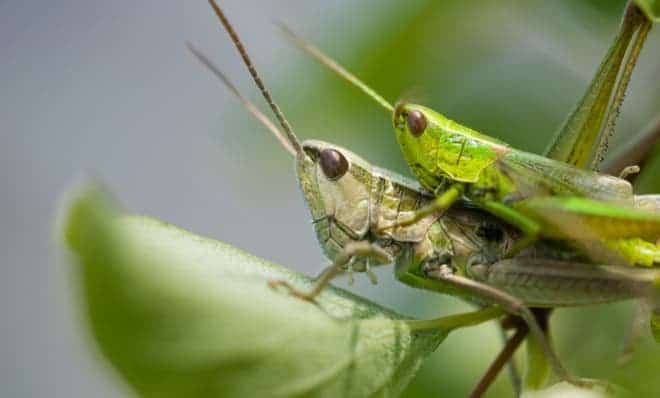 The characteristic “chirp” a cricket makes is created when the insects rub their legs, in an attempt to draw the attention of any nearby female. If he is successful and finds an interested counterpart, the couple quickly gets down to business. Interestingly enough, it’s the female that mounts the male, but that’s less important here; what is important is the devastating virus that affects cricket populations – acting like an aphrodisiac, but rendering its hosts infertile.

The virus, known as IIV-6/CrIV spreads through sexual contact, so it has everything to benefit from cricket copulation. However, as researchers showed, the virus actually caused the sexual contact in the first place! It’s a brilliant bit of behavior manipulation, but not unique; several viruses alter the behavior of the host in order to improve their chances of survival and replication – and it’s not only viruses that do this. Hairworms turn their grasshopper hosts into suicide jumpers so they can get to water while some wasps force spiders to build weird webs to support their cocoons.

Biologist Shelley Adamo noticed something was strange with some of the crickets she kept at the Dalhousie University in Nova Scotia stopped laying eggs. She dissected some of them and found that their reproductive organs had turned blue and were severely bloated – clearly something was awry. She continued her studies and with the help of a microscope found that  the organs were full of hexagonal viral particles that had packed themselves into a crystalline shape, especially the so-called “fat bodies” – an organ that stores fats and produces proteins for the immune system. This was the best place for the virus to infect, because it could affect the communication between the immune system and the nervous system, as well as alter the host’s behavior.

For the virus, the advantage of encouraging promiscuous behavior is easy to understand – but what about the castration? What does the virus have to win by making its hosts sterile?  This kind of “parasitic castration” can help viruses and parasites secure more of the host’s bodily resources for themselves without killing or effectively hurting their hosts.

But the virus has even more tricks up its sleeve. Most notably, it keeps them in good enough shape to attract a mate. Animals that are sick aren’t usually in the mood for mating. They don’t feel so good, they often lose body weight, their temperature might get higher, and so on. But even if they do try to mate, their potential partners often pick up on these cues and avoid them. That would spell disaster for a sexually transmitted disease – but the crickets with IIV-6/CrIV didn’t show any of these “sickness behaviors”. This could only mean one thing: the virus is blocking the fat body from producing signals which would be picked up by the immune system. This is one tricky virus!

At the moment, Adamo isn’t really sure how the virus does all this, but more research will follow, and the underlying mechanisms will be revealed.

To me, the way the virus managed to evolve in order to make all these changes in its host is simply remarkable – and yet another testimony of how powerful viruses can really be.