Bees can bite too, not only sting

by Tibi Puiu
in Animals, Biology
Reading Time: 2 mins read
A A
Share on FacebookShare on TwitterSubmit to Reddit 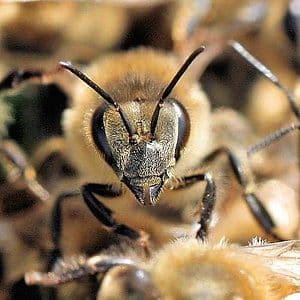 Honeybees are among the most well armed insects, remarkably enough however it seems that we’ve only seen one side of their undercoat. Apparently, according to a recent discovery by Greek scientists, honeybees use a biting attack to ward off intruders. The bite delivers a toxin that paralyzes their victims, don’t worry though, they can’t bite humans. Actually, researchers are considering using the toxin as an anesthetic.

The discovery came as a fluke after Aristotle University of Thessaloniki were studying wax moths, common pests for honeybees which attack colonies and honeycombs. When dealing with these moths, as well as other pests like varro mites, the bees use their venomous bite as a weapon of first resort, since the targets are too small for their stingers. The toxin released is 2-heptanone (2-H), which has been known to scientists for while, occurring naturally in some foods such as beer and white bread, and known to be secreted by some insects.

What came as a surprise was its use as a poison, something that hasn’t been encountered thus far. Until recently, scientists believed it was only used as a pheromone for signaling. The toxin isn’t lethal, but paralyzes its tiny victims for roughly nine minutes – enough time for the bees to usher the pests out of the colony. The next step for the researchers is to test 2-heptanone on animals and assess whether it can be consider a viable alternative to other anesthetic substances that may cause allergies.

Findings were reported in the journal PLoS One.