by Alexandru Micu
in Biology, Electronics, News, Videos
A A

MIT researchers have developed “living” tattoos. They rely on a novel 3D printing technique based on ink made from genetically-programed cells.

There seems to be a growing interest in living, 3D-printable inks these days. Just a few days ago, we’ve seen how scientists in Zurich plan to use them to create microfactories that can scrub, produce, and sense different chemical compounds. Now, MIT researchers led by Xuanhe Zhao and Timothy Lu, two professors at the institute, are taking that concept, and putting it in your skin.

The technique is based on cells programmed to respond to a wide range of stimuli. After mixing in some hydrogel to keep everything together and nutrients to keep all the inhabitants happy and fed, the inks can be printed, layer by layer, to form interactive 3D devices.

The team demonstrated their efficacy by printing a “living” tattoo, a thin transparent patch of live bacteria in the shape of a tree. Each branch is designed to respond to a different chemical or molecular input. Applying such compounds to areas of the skin causes the ‘tree’ to light up in response. The team says the technique can be sued to manufacture active materials for wearable tech, such as sensors or interactive displays. Different cell patterns can be used to make these devices responsive to environmental changes, from chemicals, pollutants, or pH shifts to more common-day concerns such as temperature.

The researchers also developed a model to predict the interactions between different cells in any structure under a wide range of conditions. Future work with the printing technique can draw on this model to tailor the responsive living materials to various needs.

“It turns out those cells were dying during the printing process, because mammalian cells are basically lipid bilayer balloons,” he explains. “They are too weak, and they easily rupture.”

So they went with bacteria and their hardier cellular wall structure. Bacteria don’t usually clump together into organisms, so they have very beefy walls (compared to the cells in our body, for example) meant to protect them in harsh conditions. They come in very handy when the ink is forced through the printer’s nozzle. Again, unlike mammalian cells, bacteria are compatible with most hydrogels — mixes of water and some polymer. The team found that a hydrogel based on pluronic acid was the best home for their bacteria while keeping an ideal consistency for 3D printing.

“This hydrogel has ideal flow characteristics for printing through a nozzle,” Zhao says. “It’s like squeezing out toothpaste. You need [the ink] to flow out of a nozzle like toothpaste, and it can maintain its shape after it’s printed.”

“We found this new ink formula works very well and can print at a high resolution of about 30 micrometers per feature. That means each line we print contains only a few cells. We can also print relatively large-scale structures, measuring several centimeters.”

The team printed the ink using a custom 3D printer they built — its based largely on standard elements and a few fixtures the team machined themselves.

A pattern of hydrogel mixed with cells was printed in the shape of a tree on an elastomer base. After printing, they cured the patch by exposing it to ultraviolet radiation. They then put the transparent elastomer layer onto a test subject’s hand after smearing several chemical samples on his skin. Over several hours, branches of the patch’s tree lit up when bacteria sensed their corresponding stimuli.

The team also designed certain bacterial strains to work only in tandem with other elements. For instance, some cells will only light up when they receive a signal from another cell or group of cells. To test this system, scientists printed a thin sheet of hydrogel filaments with input (signal-producing) bacteria and chemicals, and overlaid that with another layer of filaments of output (signal-receiving) bacteria. The output filaments only lit up when they overlapped with the input layer and received a signal from them.

Yuk says in the future, their tech may form the basis for “living computers”, structures with multiple types of cells that communicate back and forth like transistors on a microchip. Even better, such computers should be perfectly wearable, Yuk believes.

Until then, they plan to create custom sensors in the form of flexible patches and stickers, aimed at detecting to a wide variety of chemical and biochemical compounds. MIT scientists also want to expand the living tattoo’s uses in a direction similar to that developed at ETH Zurich, manufacturing patches that can produce compounds such as glucose and releasing them in the bloodstream over time. And, “as long as the fabrication method and approach are viable” applications such as implants and ingestibles aren’t off the table either, the authors conclude. 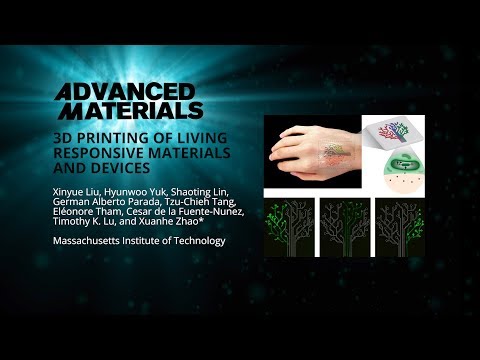 The paper “3D Printing of Living Responsive Materials and Devices” has been published in the journal Advanced Materials.