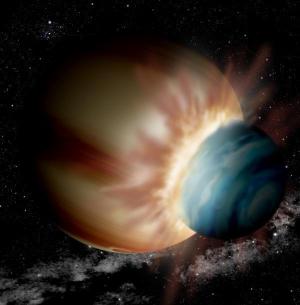 Not a Hollywood movie or something like that; not even a pun. The title is in the most literal fashion it could be. But how could this be? Worlds can’t collide, can’t they? Hard to say. Anyway astronomers have announced that a mystery object orbiting a star 170 light-years from Earth might have formed from the collision and merger of two protoplanets.

This object has puzzled them as it just seems to not be physically posible because its temperature, luminosiry, age and location just don’t match with any theory. “This is a strange enough object that it needs a strange explanation,” said Eric Mamajek of the Harvard-Smithsonian Center for Astrophysics (CfA). The object (let’s call it so) is called 2M1207B and it orbits a 25-Jupiter-mass brown dwarf called 2M1207A seen in the direction of the constellation Centaurus. Computer models show that 2M1207A is very young, only about 8 million years old; therefore its companion should also be 8 million years old. Everything sounds ok until here.

But the thing is that at that age it should have lowered its temperature to less than 1300 degrees Fahrenheit (1000 Kelvin). But observations have showed that in fact it has a temperature of about 2400 degrees F (1600 K) and this temperature could very well be the result of a protoplanetary collision.

“Most, if not all, planets in our solar system were hit early in their history. A collision created Earth’s moon and knocked Uranus on its side,” explained Mamajek. “It’s quite likely that major collisions happen in other young planetary systems, too.”

Also they were expecting a certain luminosity from it it is 10 times fainter than expected. In our solar system planets are assembled from dust, rock, and gas, gradually growing larger over millions of years. In this way this object could be the result of a collision between a gas giant about the size of Saturn and a planet about three times as big as the Earth; they were so big that they just got stuck together forming a larger world still boiling from the heat generated in the collision.

“The Earth was hit by something one-tenth its mass, and it’s likely that other planets in our solar system were too, including Venus and Uranus,” explained Meyer. “If that one-tenth scale holds in other planetary systems, then we could be seeing the aftermath of a collision between a 72 Earth-mass gas giant and an 8 Earth-mass planet, even though such collisions are very unlikely.”

It is not a certitude that it was formed due to a collision but that theory is very probable. They are currently making some tests and we are probably going to find the answer a year or two from now.